After Tracking Trump ‘Falsehoods,’ Washington Post Says It Won’t Do the Same for Biden 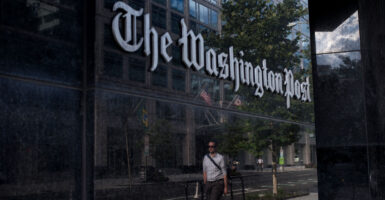 The Washington Post, which went to extraordinary lengths to track former President Donald Trump's veracity, is seemingly set to give his successor a pass. (Photo: Brendan Smialowski/Agence France-Presse/Getty Images)

The Washington Post will have a lot more time on its hands now that President Joe Biden has been sworn in. According to the paper’s spokesperson, it can call off its whole fact-checking operation.

Apparently, it’s not necessary now that its preferred party is in office.

The Daily Caller’s Shelby Talcott reached out to the Post after it published its final tally of “lies or misleading statements by Donald Trump.” The newspaper’s alleged total: 30,573. (Of course, considering the media’s inability to trade in facts themselves, no one will ever know how many of those Pinocchios are real.)

Now, regardless of Biden’s own issues with the truth, the Post says it has “no plans” to keep a Biden database of falsehoods “at this time.”

“The database of Trump claims was started a month after Trump became president as a way not to overwhelm our fact-checking enterprise,” the Post spokesperson said. Don’t worry, the paper insisted, we’ll still try to keep track of both parties’ statements.

But Biden, Talcott pointed out, has plenty of baggage when it comes to untruths. She pointed to a list of public embarrassments, dating as far back as 1987 when C-SPAN found footage of him lying about his graduating rank in law school. It was such a scandal that Biden had to drop out of the presidential race.

Then there were the stories that no one would confirm about Biden being arrested in South Africa when he said he was trying to visit Nelson Mandela in prison. The Washington Post’s own fact-checkers looked at that claim last year and called it “ridiculous.”

Before that, the Post had called him out for an account he shared about his trip to Afghanistan. “In the space of three minutes, Biden got the time period, the location, the heroic act, the type of medal, the military branch and the rank of the recipient wrong, as well as his own role in the ceremony,” the Post insisted.

Now, when the stakes are highest, Biden gets a free pass?

Does The Washington Post suddenly believe that facts are partisan? Ironically, this news about the fact-checkers broke on the same day as a new poll, showing that record numbers of Americans think the press is intentionally trying to deceive us.

If you were one of the only people on earth still giving the media the benefit of the doubt, this should make it clear: The press has an agenda—and protecting Democratic leaders is part of it.