Why Isn’t Biden to Blame for COVID-19 Deaths? 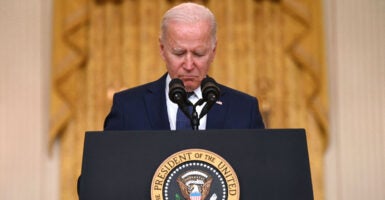 President Joe Biden is trying to change the subject of the Taliban bombing Kabul and killing U.S. troops. Instead, he is focusing on how Republican governors are allegedly putting citizens at risk by opposing Democrats’ authoritarian COVID-19 policies. Pictured: Biden delivers remarks on Aug. 26, 2021, after the Taliban bombed Kabul. (Photo: Jim Watson/Getty Images)

One of the most morally revolting talking points taken up by Democrats in their effort to deflect attention from President Joe Biden’s deadly incompetence in Afghanistan is to minimize the deaths of 13 troops in Kabul, Afghanistan, by pointing out that more people are dying from COVID-19 every day.

First of all, if we use the standards that Democrats set during the Trump years, those COVID-19 deaths are also the responsibility of Biden.

It should be said that comparing deaths caused by a faceless worldwide pandemic to the deaths of American troops who were needlessly placed in a perilous situation by an administration that handed security of Kabul to the Taliban is a special brand of cynical partisanship.

Both Afghanistan and COVID-19 are tragic, but only one is man-made, an avoidable massacre that was perpetrated by enemies and made possible by our government’s ineptitude and bad decisions.

You might remember that liberal pundits had taken to using similarly ugly comparisons involving 9/11. Paul Krugman once noted that the death toll of COVID-19 was already the equivalent of “60 9/11s.” MSNBC analyst Malcolm Nance wrote that former President Donald Trump had “single handedly caused the equivalent of 67 9/11 level deaths.” This was the tone of much of the coverage.

Well-adjusted human beings—those not consumed by politics—tend to treat tragic events as distinct situations. They react to a death from meningitis or a car accident with grief, while reacting to a death resulting from a first-degree murder or drunk driving with anger and grief.

Most well-adjusted people also comprehend that living in a free, modern society comes with unfortunate embedded risks. We don’t talk about the cumulative total of vehicular deaths as we would the Holocaust.

Biden ran on stopping the pandemic. “I will not shut down the country,” the then-presidential candidate promised. “I will shut down the virus,” “I will beat this virus,” and so on. Biden blamed COVID-19 deaths on Trump personally on numerous occasions, so one assumes he believed that the former president had the power to stop COVID-19.

Other than promising to employ his imaginary competence, Biden never informed us of how he would conduct policy any differently than Trump. Biden, in fact, had opposed Trump’s China travel restrictions, calling him “xenophobic.”

And though Biden has benefited from, and tried to take credit for, the Trump-era Warp Speed program, his team initially worked to undermine trust in those vaccines. Since Biden’s inauguration, hundreds of thousands of Americans have perished in the pandemic.

Biden’s handling of COVID-19 is perhaps the last issue that he isn’t upside-down on in the polls, so his allies want to change the subject and continue creating the impression that Florida Gov. Ron DeSantis and Texas Gov. Greg Abbott are intentionally putting their constituents at risk because they refuse to adopt the authoritarian policies preferred by Democrats.

Despite the perception created by histrionic media coverage, we don’t yet understand why states do better or worse under pandemic conditions.

Yet, suddenly, governors, rather than the president, are at fault for spikes. Perhaps the only American politician who can credibly be blamed for causing significantly more deaths than necessary is disgraced New York Gov. Andrew Cuomo, whom Biden once called “the gold standard” in COVID-19 leadership.

New York still holds the dubious distinction of having the third-highest percentage of coronavirus fatalities in the country. Cuomo’s few remaining defenders point out that most of those deaths happened earlier in the pandemic, when we knew less. OK, what’s Biden’s excuse, then?

It speaks to the technocrat’s destructive utopian conceit that some sincerely believe Americans can be protected from all the deadly vagaries of the world if only we instituted more authoritarian control or some progressive policy prescription.

The reality is that neither Biden nor Trump deserves blame for COVID-19 deaths. Neither had a silver bullet. Yet the public is constantly expected to live by revolving political standards depending on who’s president. You can’t have it both ways.