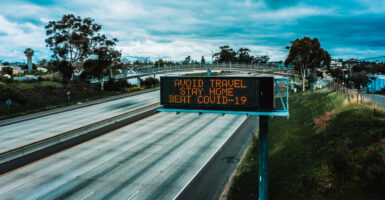 California is proving it’s more authoritarian than ever.

As many other states have reopened in stages, California officials have opened the Golden State, too—except they repeatedly seem to be applying different guidelines for reopening businesses, schools, and houses of worship.

The examples are numerous. Private schools are not allowed to open, per Gov. Gavin Newsom’s orders.

St. Abraham’s Classical Christian Academy in Santa Cruz has petitioned local leaders via attorneys to open, as COVID-19 rates in that county have declined. A group of California parents and children—ranging from kindergarteners to high school seniors—filed a lawsuit Aug. 17 asking the court to let the kids learn in person at their respective, small, religious schools.

The pandemic and executive orders aside, private schools should be able to open, since they don’t operate via state or federal funds. They also are striving to take precautionary safety and sanitary measures and abide by guidelines outlined by the Centers for Disease Control and Prevention. This should be taken into account.

California’s houses of worship have been restricted in various ways. According to an order issued July 29, houses of worship in Los Angeles County had to limit indoor gatherings to 100 people or 25% capacity, whichever is lower. On Aug. 13, Newsom issued an order that superseded the previous one, prohibiting all indoor services.

Some churches defied this order. In mid-August, Pastor John MacArthur opened his mega church, Grace Community. “I’m so happy to welcome you to the Grace Community Church peaceful protest,” MacArthur said from the pulpit. His congregation applauded.

All these restrictions might seem reasonable in light of a global health crisis, but California’s elected and public health officials don’t seem to be treating secular and religious institutions the same. Regulations for businesses released around the same time as those for houses of worship were slightly different.

Casinos are allowed to open, and the state requires no limitations on capacity, just masks and social distancing. Admittedly, the large business that operates most like a church is a movie theater (with many rows of side-by-side seating), and theaters were capped at 25% capacity or a maximum of 100 people, whichever is lower.

For most of California, the new rules won’t result in many immediate changes because restaurant dining, religious services, gyms and fitness centers, movie theaters, and museums will remain restricted to outdoors only in the vast majority of counties in the state … All retail stores and shopping malls also are permitted to open at a maximum of 25% capacity, state officials said.

Barber shops and hair salons may open with precautions.

The fact that houses of worship and private schools remain able to open only slightly or remain closed entirely while some businesses may operate freely and some do so with restrictions seems too heavy-handed and arbitrary to be accidental. It seems obvious that California’s leaders are engaging in a bit more authoritarian governing than normal.

The fact that protesters have swarmed large cities in California with little condemnation from city leaders just adds to the hypocrisy.

Prohibiting churches from holding indoor services seems absurd both logistically and under the First Amendment, even if one could make the case that churches were being treated the same as secular businesses. The right to entertainment or even consumption of food, travel, or housing is not a constitutional right—the right to the free exercise of religion is.

However, under Employment Division v. Smith—which held that California could deny unemployment benefits to a person fired for violating a state prohibition even when religion played a key role—this argument may not hold up at the Supreme Court either.

Although schools and churches that defy government orders and reopen must be willing to bear the consequences of their civil disobedience, any organization that does so nevertheless should observe basic safety precautions—masks, social distancing, and hand sanitizing. An outbreak of COVID-19 certainly would prove the government’s point, even if that seems to be wrong.

With Hollywood at the helm, California long has ridden the waves of progressivism. But consistently forcing private entities such as schools and churches to remain closed while some businesses remain open is beyond unfair.

This time Newsom has gone too far.