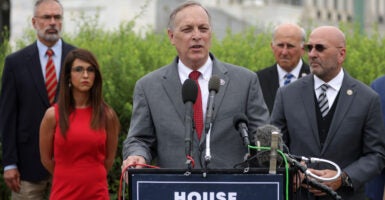 The House Freedom Caucus called Tuesday for President Joe Biden and other administration officials to resign in order to take responsibility for the botched withdrawal from Afghanistan.

“We call upon—most somberly—the resignation of this president, Joe Biden,” Rep. Andy Biggs, R-Ariz., chairman of the House Freedom Caucus, a group of conservative Republican members of the House of Representatives, said at a press conference in front of the Capitol.

Several members of the caucus spoke at the briefing, as they also called for the resignations of Defense Secretary Lloyd Austin and Joint Chiefs of Staff Chairman Gen. Mark Milley.

The press conference comes after 87 retired generals and admirals in a joint statement called for Austin and Milley to step down.

“We believe that he has got culpability for much of the travesty that has gone on here,” Biggs said of Blinken. “We’ve also called for resignations of various leaders. We are joined, for instance, in our call for resignations of Secretary Austin and Gen. Milley by [87 retired generals and admirals].”

That was the lead-up to Biggs’ call for Biden to step down.

“We also call upon the person that said ‘the buck stops here,’ who said more than 20 times we will not leave any American behind,” Biggs said. “The person who basically orchestrated the July 2 evacuation of Bagram [Airfield in Afghanistan] without telling Afghanis, we call upon—most somberly—the resignation of this president, Joe Biden.”

Rep. Clay Higgins, R-La., said he was ready for Vice President Kamala Harris to become president, as he spoke to “my Democratic brothers and sisters across the country.”

Rep. Andrew Clyde, R-Ga., a 28-year Navy veteran, focused on the Americans left behind in Afghanistan.

In remarks Tuesday, Biden said that between 100 and 200 Americans remained in Afghanistan. However, earlier estimates were as high as 15,000.

“The administration lied to the American people, and we will now have dire consequences for those actions. How many are left, Mr. President?” Clyde said.

The estimates are from a few hundred to a few thousand American citizens and their families.

I fear we are on the brink of another Tehran hostage crisis, but on a much more massive scale. Think about that. President Biden and his advisers should have seen the fall of Afghanistan coming, as the intelligence assessments provided were indeed accurate.

Last week, after the terrorist attack in Kabul, Afghanistan, that killed 13 American military personnel, Republican Sens. Marsha Blackburn of Tennessee and Josh Hawley of Missouri called on Biden to resign for the botched evacuation.

This is a day where U.S. service members … lost their lives at the hands of terrorists. It’s not a day for politics, and we would expect that any American, whether they are elected or not, would stand with us and our commitment to going after and fighting and killing those terrorists wherever they live and to honoring the memory of service members.

“President Biden has been in elected office for 50 years,” the Louisiana lawmaker said. “It’s arguable that he is not in his whole and right mind. We are compassionate people, but we expect performance. And the performance from President Biden calls for him to step down.”

Rep. Scott Perry, R-Pa., a former Army brigadier general, called on House Minority Leader Kevin McCarthy, R-Calif., to “make the motion to vacate the chair,” and relieve House Speaker Nancy Pelosi, D-Calif., of her leadership. That’s in response to Pelosi’s not agreeing to Republican demands to call the House back into session and investigate the Biden administration’s Afghanistan withdrawal.

[Responsibility for] leaving Americans citizens behind in the combat zone is reserved for one party and one party only. That would be the Democrats.

Earlier Tuesday, McCarthy pushed for the House to come back into session to require the Biden administration to present a plan on how it will get every remaining American out.

“What is the plan to get Americans out? Never in my lifetime would I have ever believed America would have an administration knowingly make a decision to leave Americans behind,” McCarthy said, “whereas just two weeks ago, the president promised he would not leave until every American is out.

“We are two weeks away from the 20th anniversary of 9/11. We now have Americans stuck in Afghanistan [and] the Taliban in charge with more weaponry than they’ve ever had in the past and a border that is open,” he said.