Biden Not Certain How Many Americans Stranded in Afghanistan 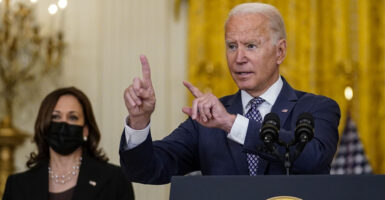 "I cannot promise what the final outcome will be, or that it will be without risk or loss," says President Joe Biden, flanked by Vice President Kamala Harris, as he talks Friday about the evacuation from Afghanistan of American citizens and Afghan allies and their families. (Photo: Kent Nishimura/Los Angeles Times/Getty Images)

President Joe Biden vowed Friday to evacuate every American in Afghanistan who wants to go home, but seconds later said he can’t promise a “final outcome.”

Biden made the contradictory points in scripted remarks, before he took a few questions on the Taliban’s takeover of Afghanistan as the U.S. hastily withdrew forces. It was the first time that the president took live questions from news reporters since the botched U.S. withdrawal.

Biden said administration officials “don’t have the exact number of people who are Americans” remaining in Afghanistan, but that he is counting on the Taliban to ensure safe passage for those who want to leave.

Estimates of the number of Americans still in Afghanistan vary from under 5,000 to as many as 40,000, according to published reports.

In his opening comments, Biden said:

Let me be clear. Any American who wants to come home, we will get you home.

Make no mistake, this evacuation mission is dangerous. It involves risks to armed forces and it is being conducted under difficult circumstances. I cannot promise what the final outcome will be, or that it will be without risk or loss. As commander in chief, I can assure you that I will mobilize every resource necessary.

While speaking and taking a few questions from reporters in the East Room of the White House, Biden was flanked by Vice President Kamala Harris, Secretary of State Antony Blinken, Defense Secretary Lloyd Austin, and national security adviser Jake Sullivan.

The president at times seemed unclear regarding the evacuation flights out of the U.S.-controlled international airport in Kabul.

He said that the administration didn’t know how many Americans are in Afghanistan and that the Taliban—long designated a terrorist group—wants international legitimacy.

And after repeating that “the buck stops with me,” Biden said the U.S. withdrawal was based on a “consensus” of his advisers, without specifically addressing the chaotic nature of that exit.

Biden’s appearance lasted just under 30 minutes, and he took questions from only five reporters—from Associated Press, National Public Radio, Bloomberg News, “PBS NewsHour,” and ABC News—after his scripted remarks. Many others called out questions as he walked out.

Reporters pressed Biden about whether Americans were having difficulty getting to the airport in Kabul for flights out of Afghanistan. The president said Americans will be able to board outbound planes based on a deal with the Taliban to allow safe passage to the airport.

“To the best of our knowledge, the Taliban checkpoints, they are letting through people showing American passports,” Biden said, adding: “We have an agreement that they will let pass through the checkpoints that they, the Taliban, control. Let Americans through.”

The U.S. gave up its own heavily fortified air base at Bagram in the sudden exit.

Biden spoke recently with the leaders of Germany, Britain, and France about convening a discussion among G-7 leaders next week to address what is happening in Afghanistan.

Biden, answering a question, predicted that the Taliban, an armed terrorist group with a history of horrific violence, will want to have international legitimacy as it runs Afghanistan.

“Secretary Blinken and I am going to be working with our allies to see to it that we can bring international pressure on the Taliban,” Biden said, adding:

However, foreign policy experts have predicted that Chinese investment in Afghanistan could insulate the Taliban government from international pressure on human rights.

Biden tried to swat away a question that the hasty exit would cause the United States to lose credibility with global allies.

“I have seen no question of our credibility from our allies around the world. I’ve spoken with our NATO allies,” Biden said, noting that Blinken and Austin also spoke with counterparts in allied countries.

“The fact of the matter is, I have not seen that,” the president said on whether American credibility had been hurt. “As a matter of fact, the exact opposite I’ve got.”

Biden also posed his own question during the press conference: “What interest do we have in Afghanistan with al-Qaeda gone?”

But Voice of America reported the Taliban has put senior members of the Haqqani Network, with close ties to the al-Qaeda terrorist network that executed the 9/11 attacks, in charge of security in Afghanistan’s capital city of Kabul.

During his opening remarks, Biden said the U.S. has evacuated a total of 13,000 since Aug. 14, but seemed to indicate the administration is uncertain how many Americans remain in Afghanistan, saying:

Even with the pause, we’ve moved out 5,700 evacuees yesterday and we are working on a variety [sic] to verify that number of the Americans still in the country as we work on this, because we’re not—don’t have the exact number of people who are Americans are there [sic]. And those who may have come home to the United States, we want to get a strong number as to exactly how many are there.

The Biden administration faces harsh and bipartisan criticism for how it executed the U.S. withdrawal.

The president, who has sent about 6,000 troops back into Afghanistan to help in the evacuation, repeatedly has defended his earlier decision to pull out what was about 2,500 remaining troops.

Biden made two other public speeches earlier this week, but did not take questions from reporters. He did, however, sit down for a one-on-one interview on ABC News with anchor George Stephanopoulos, a former top aide to President Bill Clinton.

In a problematic story for Biden, The Wall Street Journal reported Thursday that a State Department cable July 13 warned that the Taliban would overrun Kabul and take over the Afghan government faster than expected if the United States withdrew.

The cable came five days after Biden had assured reporters during a July 8 press conference that Afghanistan would not fall to the Taliban.

Asked about the State Department warning Friday, Biden said, “We got all kinds of cables. All kinds of advice.”

He added that some were “saying it would fall to others, saying it wouldn’t happen for a long time, and they [Afghan forces] would be able to sustain themselves through the end of the year.”