6 Reasons China, Not Just Taliban, Benefits as US Exits From Afghanistan 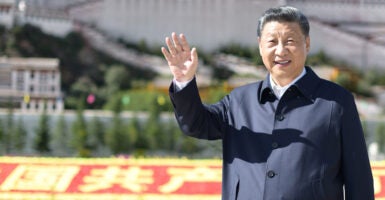 The U.S. abandonment of Afghanistan presents an opportunity for China, but one that the communist regime likely will take cautiously.

Beyond Afghanistan, a major Chinese propaganda organ already has used the U.S. defeat there to warn Taiwan (which the communist regime claims as part of China) and potentially other countries.

China’s diplomats met late last month with Taliban leaders before the U.S. exit. Although Beijing is about 3,400 miles from Kabul, the two countries share a 50-mile border and China is expected to give early diplomatic recognition to a Taliban government in Afghanistan.

Here are six keys to understanding the mutual benefits of the hasty U.S. withdrawal.

1. What China Has to Gain

China now could have access to oil, copper, and rare earth minerals in Afghanistan, experts say.

The communist regime also will want infrastructure, roads, and railways to access mining areas. The connection would be part of China’s Belt and Road Initiative, a multitrillion-dollar strategy of investing abroad to gain influence over other countries.

“China benefits immensely” from the U.S. exit from Afghanistan, said Marco Rimanelli, a professor of political science and international security at Saint Leo University in Florida.

“By expanding the Belt and Road Initiative, the Chinese are using a form of predatory capitalism by making nations completely dependent on China,” Rimanelli told The Daily Signal. “Once a country is unable to pay back its debts, China tries to extract political concessions.”

China has used this model to gain leverage in Africa and in Latin America, often in smaller countries with extensive natural resources.

China’s expansion of its Belt and Road Initiative will be a key goal in Afghanistan, said Anthony Alexiou, founder of the Minotaur Group, a Washington-based consulting firm on geopolitical risk.

“China has been engaging with Kabul about the construction of a Peshawar-Kabul highway, which would make Afghanistan a major participant in China’s infrastructure and investment plans also known as the Belt and Road Initiative,” Alexiou told The Daily Signal.

“China is also looking to build another road through the Wakhan Corridor, which would connect [the Chinese territory of] Xinjiang to Afghanistan and then onwards to Pakistan and Central Asia.”

China is engaged in what some call a genocide of the Uyghur Muslim population within its borders, especially in Xinjiang.

Chinese officials have concerns that under the Taliban, Afghanistan again will become a safe haven for terrorists who could attack China, according to news reports.

The Taliban itself isn’t concerned, a spokesman insisted.

“We have good relations with China. … China is a friendly country and we welcome it for reconstruction and developing Afghanistan,” Taliban spokesman Suhail Shaheen was quoted as saying.

The Taliban, a militant Islamist party, was ousted from power by the U.S. and allies two decades ago after it provided refuge to al-Qaeda, the terrorist organization behind the 9/11 attacks on America.

A spokesman for the Chinese Foreign Ministry said: “The Taliban have repeatedly expressed their hope to develop good relations with China, and that they look forward to China’s participation in the reconstruction and development of Afghanistan.”

Other Muslim countries have accepted Chinese investment with little or no protest to the plight of the Uyghurs, such as the Organization of Islamic Cooperation, an internaational group of 57 Muslim-majority nations.

“Afghanistan has been a war-torn and unstable country for two decades. It needs development and it needs money, and the Chinese are willing to provide both. And I think the Taliban will turn a blind eye to the Uyghur issue to get it,” Alexiou, the founder of Minotaur Group, told The Daily Signal.

“At the end of the day, despite ideologies and dogma, at some point soon the Taliban will have to begin the mundane tasks of simply administratively governing a country,” Alexiou said.

3. Fallout for Taiwan, Other U.S. Allies

China seized on the humiliating exit by U.S. forces, with the state-run Global Times running a piece warning Taiwan about the U.S. lack of commitment to allies.

“How Washington abandoned the Kabul regime particularly shocked some in Asia, including the island of Taiwan,” the Global Times said Monday in an editorial, adding:

The situation in Afghanistan suddenly saw a radical change after the country was abandoned by the U.S. And Washington just left despite the worsening situation in Kabul. Is this some kind of omen of Taiwan’s future fate? …

From what happened in Afghanistan, [Taiwanese authorities] should perceive that once a war breaks out in the Straits, the island’s defense will collapse in hours and the U.S. military won’t come to help.

China’s state-run Xinhua News Agency tweeted that “history repeats itself” while showing side-by-side photos of U.S. helicopters evacuating from Saigon in 1975 and Kabul over the weekend.

A day later, the Chinese Ministry of Foreign Affairs issued a statement demanding that the U.S. “stop official contacts & military ties with Taiwan, stop arms sales to Taiwan, and reject the ‘Taiwan independence’ separatist forces and their separatist activities.”

In a statement to Fox News, a senior Biden administration official called it unfortunate that the Chinese government would be “exploiting human suffering in Afghanistan.”

“We have an abiding interest in peace and stability across the Taiwan Strait,” the senior official said. “We consider this central to the security and stability of the broader Indo-Pacific region. Events elsewhere in the world are not going to change this enduring interest.”

Still, the apparent lack of U.S. preparation for an orderly exit from Afghanistan does not give allies confidence, said Dean Cheng, a senior fellow in Asian studies at The Heritage Foundation, parent organization of The Daily Signal.

“China sent a strategic message to all of our allies in the region: It’s time to deal with us because you can’t rely on the Americans,” Cheng told The Daily Signal. “I don’t think they will invade Taiwan soon. But they are amping up their political message.”

This message from China regarding Taiwan extends to all U.S. allies in Southeast Asia, Cheng added.

“Countries will wonder, why do anything to antagonize China if the Americans won’t have our back?” he said.

4. What the Taliban Has to Gain

Money and infrastructure are important for Afghanistan in dealing with China. But political insulation is also key, said Jason Killmeyer, former chief of staff of global defense, security, and justice at Deloitte Consulting, a multinational financial firm.

“The Taliban will view Chinese money as a way to insulate the country from pressure from the rest of the international community,” Killmeyer told The Daily Signal, adding:

It further shields the Taliban from international pressure. It’s the Chinese model: Provide short-term stability for dictators to have an economic lifeline from China, and release them from pressure from the rest of the world.

Moreover, Afghanistan’s Taliban government can gain the economic benefits of working with a powerful world power without obligations, Cheng said.

“China doesn’t want Afghanistan to adopt any values. The Soviets wanted it to be communist. The U.S. wanted it to be a democracy. China wants to do mining and extract their resources,” Cheng said.

He added: “If the Taliban wants to shoot everyone who isn’t Chinese or Muslim, China will say, ‘Go ahead’ and say, ‘We don’t care what you do with your people, we want access to the rocks.’”

Access to Afghanistan also provides an advantage for China against India, a major global economic competitor. Several experts noted that China already is aligned with Pakistan, a military rival to India.

“Afghanistan has been pro-India; now it will be pro-Pakistan,” Saint Leo University’s Rimanelli said.

It is a mistake to view developments in the region only from a U.S.-China dynamic when India is a strong U.S. ally and the world’s largest democracy, noted Juscelino Colares, co-director of the International Law Center at Case Western Reserve University School of Law.

“India is already a big loser in this,” Colares told The Daily Signal. “India had an embassy in Afghanistan and now it doesn’t. The Taliban are pro-Pakistan. This really hurts India’s strategic position against China.”

The world shouldn’t overestimate China’s capacity to dominate Asia and the Middle East economically, said Colares, who also is a political science professor.

“The Chinese have tremendous debt and we don’t know how much because the government is so opaque,” Colares said. “Events have played to their advantage, but we live in a world of limited resources.”

Also, accessing natural resources in the mountainous terrain of Afghanistan might not be as simple as an agreement between the Taliban and the Chinese Communist Party.

“The question is what will the locals say,” Heritage’s Cheng said, adding:

Will the people on the mountain tops want China to come in and build roads and extract resources? … All it takes is one tribe to dispute, or one warlord to say he requires twice as much as the other tribal leader, and another warlord might say, ‘Hold on.’ Then it comes down to the village or tribal level.