Taiwan Remains a Strong US Partner 40 Years After Key Legislation 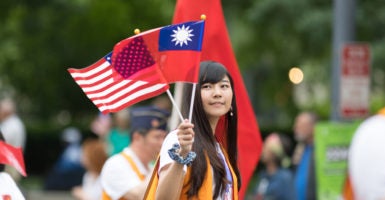 Since passage of the Taiwan Relations Act in 1979, the U.S. and Taiwan have grown closer as Pacific partners. (Photo: Roberto Galan/Getty Images)

The Senate last week passed a bipartisan resolution by unanimous consent that reaffirms America’s commitment to Taiwan and to the Taiwan Relations Act.

The Taiwan Relations Act, passed in 1979, set up a unique relationship with Taiwan whereby the U.S. engaged Taiwan politically and economically. China has claimed Taiwan as its own territory since Taiwan became a republic in 1947.

Passage of the resolution was a timely act of Congress, as this year marks the 40th anniversary of the Taiwan Relations Act.

Also of note, the House recently passed another pro-Taiwan bill called the Taiwan Assurance Act of 2019, which encourages Taiwan to build up its military and expresses a commitment to regularly sell weapons to Taiwan. The House also unanimously passed a nonbinding resolution reaffirming U.S. support for the island country.

The Taiwan Relations Act provides policy continuity as the cornerstone of trust and cooperation between the United States and Taiwan. The law has survived the test of time in the face of constant and growing criticism from China.

A member of the House, Markey, is one of only two current senators to have voted for the Taiwan Relations Act in 1979. Markey observed that, with the realities of a new era calling for renewed dedication to peace and security, “I look forward to redoubling bipartisan efforts to uphold our responsibility to strengthen relations between the people of the United States and the people of Taiwan.”

As a matter of fact, the United States and Taiwan have more in common than ever before: Both share values related to democratic principles, open and free markets, and respect for the rule of law.

Taiwan has proven to be a reliable and strong partner for America in advancing freedom, opportunity, and prosperity in the region and around the globe.

The Taiwan Relations Act has played an indispensable role in shaping American policy toward Taiwan and U.S. strategy in Asia.

Not surprisingly, Washington’s support for Taiwan has been getting stronger. Over the past year, Congress has reinforced the Taiwan Relations Act by enacting two new laws: the Taiwan Travel Act, which encourages official visits between Washington and Taipei “at all levels of government,” and the Asia Reassurance Initiative Act, which reiterates American support for Taiwan’s key role in the United States’ Indo-Pacific strategy.

Commemorating the 40th anniversary of the passage of the Taiwan Relations Act, former House Speaker Paul Ryan led the U.S. delegation to Taiwan.

The U.S.-Taiwan partnership is a rare issue on which there is consensus from both sides of the aisle, and the Taiwan Relations Act was one of those transcendent moments when Congress did exactly what it was designed to do, and as a result, strong bipartisan support for Taiwan has endured for four decades thereafter.

The strategy of the United States is to ensure that freedom and openness flourish in the Indo-Pacific region. In this endeavor, we couldn’t ask for a better friend than Taiwan. Taiwan is a democratic success story, a reliable partner, and a force for good in the world.

Taiwan has been a steadfast partner for America, and 2019 is the right time for more practical steps to ensure that Taiwan remains, for the next 40 years as well, a reliable and like-minded ally for America in advancing freedom, opportunity, and prosperity in the Pacific region and beyond.