How Will Biden Handle His Next 3 Afghan Crises? 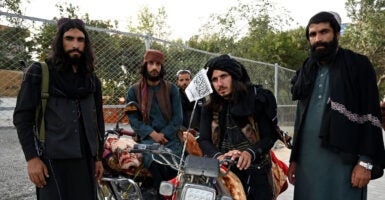 Biden has allowed Afghanistan to fall into the hands of the Taliban, creating three immediate crises that America will have to address. Pictured: Taliban fighters stand along a road in Kabul on Aug. 18, after the Taliban's military takeover of Afghanistan. (Photo: Wakil Kohsar/AFP/Getty Images)

President Joe Biden thought he might be ending endless wars, but all he accomplished was making the protection of U.S. interests in Afghanistan more costly and more at risk. Further, he faces three new crises that America will have to confront.

How Biden addresses them will shape the future of his presidency and America’s security.

Crisis No. 1: The Evacuation of Afghanistan

Biden was lying when he said the collapse of Afghanistan was inevitable. Even if he was right, a fighting withdrawal could not have been any less catastrophic. Why didn’t Biden plan better to get out people and equipment? Biden had convinced himself, despite military and intelligence advice to the contrary, that defeat was inevitable. He assumed the Taliban would let him make a lightening withdrawal and U.S. forces and civilians would be gone before the country collapsed.

That strategy left no time for a methodical withdrawal. Biden miscalculated. The Taliban had every reason to seek to humiliate the U.S. rather than allow a graceful retreat.

Now, the U.S. faces evacuating Americans, other Westerners, and Afghan refugees. The only option is through the Kabul airport, where access and the ability to use the airspace are only available through the permission of the Taliban.

Even if the Taliban permit people, there are likely upward of a hundred thousand, this will take many days, perhaps weeks. There remains the possibility that people will be taken hostage or the Taliban either already has or will make demands and ransom for people to leave.

Biden has to focus right now on getting people out. It will be dangerous and perilous activity for the foreseeable future.

There is every expectation that Afghanistan will again become a sanctuary for terrorists. After all, the Taliban controls more territory, more weapons, and more money than it did on 9/11. Further, the Taliban victory will be clarion for Islamist terrorists around the world.

In the near future, the U.S. could see a resurgent global terrorist threat—with a wide-open southern U.S. border.  Biden will need to take immediate steps to deal with this challenge or we will face another 9/11.

Biden just gifted Afghanistan to China. The Chinese will have no problem working with the Taliban. Many in the West will acerbate this by wanting to “normalize” the Taliban, mitigating our failure by claiming perhaps the Taliban won’t be so brutal.

If Biden doesn’t rise to this challenge, China will control all of South Asia.

Bottom line: The Afghan crisis is far from over. Biden just made protecting U.S. interests a great deal harder.