Biden Needs to Admit His Failures on Afghanistan 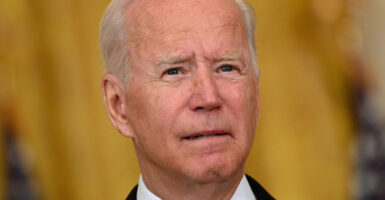 Before President Joe Biden addressed the nation on the crisis in Afghanistan, someone should have reminded him of the adage “When you are in a deep hole, stop digging.” Because on top of his strategic failures in Afghanistan, he has now made a massive political misjudgment.

Here is the problem with a White House rebuttal that just blames anybody other than Biden for the collapse in Afghanistan: Every claim can be fact-checked. Military and intelligence leaders can be asked to testify. Documents can be reviewed. None of this will make the administration or Biden’s abrupt and irresponsible decision look good.

Remember when certain politicians found out that just blaming President George W. Bush for 9/11 and believing Michael Moore’s documentary didn’t work so well after the Sept. 11 commission started calling witnesses and showing there was plenty of blame to go around for both Republicans and Democrats? Likewise, the Biden team will discover that truth finds a way, and a cover-up won’t cut it.

Biden’s speech was a categorical disaster. His remarks were the equivalent of President Ronald Reagan claiming that Iran-Contra never happened. Of course, Reagan didn’t do that. He took responsibility. He fired people. He tried to be as transparent as possible and to cooperate with the subsequent investigation. He structured the crisis so he could move on and govern.

By denying responsibility, Biden solidly made his decision-making the issue. He will have to live with the tsunami of inquiry that will follow.

Now that Biden has put himself in the crosshairs, he doesn’t have a lot of options. He can’t easily shift responsibility and fire people or have them resign. Anyone he tries to throw under the bus might well turn and point out the obvious—it was the president’s call to run away, not theirs.

Biden will have to keep the team members he has. That’s also a problem because they’re terrible. This is not like the Jimmy Carter presidency, where inexperienced advisers made rookie mistakes. This is an experienced team of Obama veterans.

Unfortunately, they are making the exact same kinds of missteps they made under President Barack Obama, ignoring risks, underestimating enemies, and being unprepared for the whirlwind that followed. The crisis mismanagement we are seeing play out in real time today looks like an instant replay of Iraq, Syria, and Libya—where we got ISIS, a genocide, and a dead ambassador as payback for bad calls by the White House.

Sure, Biden can now go back to his vacation, but the nightmare scenario will be waiting when he returns to the Oval Office. The failure in Afghanistan won’t look any better then. He will face massive political blowback. And he will have a demoralized, defeated team that doesn’t know how to turn defeat into victory.

This is fixable. Biden could admit he screwed up and immediately commit to fixing his failures. He could start by dealing with the very real possibility of a near-term resurgence of transnational terrorism. There are demonstrable steps he can take right now to show he is getting ahead of the next 9/11—like instead of demonizing Trump supporters, have the Homeland Security Department focus on its real job of hunting real terrorists.

Unfortunately, the odds of a Biden presidency opting to fix problems instead of just shifting blame and dodging responsibility are pretty low. Months after making disastrous decisions triggering the worst border crisis in modern history, the Biden team is still in denial. The president has still not fixed that problem. In fact, the Oval Office has simply been a bystander while the border problem gets bigger.

Maybe they didn’t care before Biden’s folly, but they care now. If Biden does not address their concerns and deliver real fixes to the real mayhem he has created, they may conclude he’s just not up to the job.