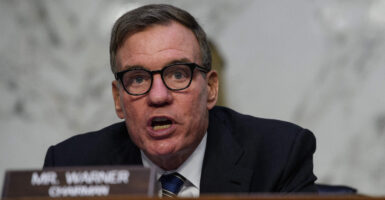 It's time for "tough but necessary questions about why we weren’t better prepared for a worst-case scenario involving such a swift and total collapse of the Afghan government and security forces," says Sen. Mark Warner, D-Va., pictured during an Aug. 4 hearing of the Senate Intelligence Committee. (Photo: Nicholas Kamm/AFP/Getty Images)

The Democrat chairman of the Senate Intelligence Committee has called for an investigation into the Biden administration’s execution of a troop withdrawal from Afghanistan that led to the rapid collapse of that country’s government.

“Intelligence officials have anticipated for years that in the absence of the U.S. military the Taliban would continue to make gains in Afghanistan,” Sen. Mark Warner, D-Va., said late Monday in a public statement.

“That is exactly what has happened as the Afghan national security forces proved unable or unwilling to defend against Taliban advances in Kabul and across the country,” Warner said, adding that the Biden administration should answer “tough but necessary questions.”

House Minority Leader Kevin McCarthy, R-Calif., called Sunday for a congressional investigation into the Biden administration’s handling of the exit from Afghanistan as the Taliban toppled the U.S.-backed government in a matter of days.

Warner’s call for a probe, however, signals potential bipartisan backing for congressional scrutiny.

Moreover, Warner is a Democrat with actual power to begin and shape an investigation as head of the Senate Select Committee on Intelligence.

In his statement, Warner said:

As the chairman of the Senate Intelligence Committee, I hope to work with the other committees of jurisdiction to ask tough but necessary questions about why we weren’t better prepared for a worst-case scenario involving such a swift and total collapse of the Afghan government and security forces. We owe those answers to the American people and to all those who served and sacrificed so much.

In remarks Monday afternoon at the White House, President Joe Biden largely blamed the Trump administration and Afghan political and military leaders for the outcome, but also said he stands behind his decision to withdraw U.S. troops.

“There’s been some criticism from Democratic lawmakers on Capitol Hill—Mark Warner, [Sen.] Bob Menendez [D-N.J.]— saying—Menendez saying, ‘I’m disappointed that the Biden administration clearly did not accurately assess the implications of a rapid … withdrawal.’ What is the White House’s response to those lawmakers?” the reporter asked.

“Well, I would first say that we did assess early on, when the president asked for a clear-eyed assessment, that there would be impacts and there would be consequences of making the choice he made,” Psaki said, adding:

He also acknowledged yesterday—and I would just reiterate—that this did happen more rapidly than we anticipated here—than anyone anticipated.  I think that accounts for members of Congress and people who are on the ground in Afghanistan.

And what our effort is now—is focused on moving as many people out as we can from the country.