On Afghanistan Fiasco, Biden Says ‘Buck Stops With Me’ While Blaming Everyone Else 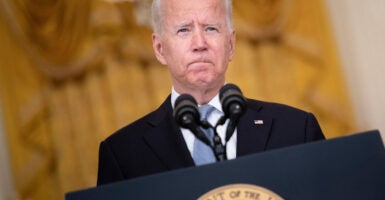 “The buck stops with me,” President Joe Biden said in an address to the nation Monday afternoon, after blaming his presidential predecessors for continuing a long war in Afghanistan.

Biden gave the speech in response to criticism of the way in which the U.S. withdrew its troops from Afghanistan. After a weekend in which the Taliban effectively took over much of that country, Biden finally addressed Americans.

“I stand squarely behind my decision,” Biden said in his televised address. “After 20 years, I’ve learned the hard way that there was never a good time to withdraw U.S. forces.”

Although Biden spent much time in his speech defending his decision to pull American troops out of Afghanistan, he did little to explain why the operation was such a mess, and was eager to shift blame to others. Even many in the mainstream left-wing press, like CNN’s Jake Tapper, noticed.

The images coming out of Afghanistan as the Taliban takes over have been both harrowing and disturbing. A mob of terrified people was seen in videos scrambling onto a runway at Kabul’s Hamid Karzai International Airport on Sunday amid rumors that the Taliban was swiftly advancing on the capital.

People desperately clung to an Air Force C-17 aircraft as it took off, and several videos have emerged of people falling from the plane after it ascended into the sky.

In July, Biden spoke at a news conference to assure the nation that the drawdown in Afghanistan was “proceeding in a secure and orderly way, prioritizing the safety of our troops as they depart.”

Biden said there were more than 300,000 members of the Afghan National Security Forces that the U.S. and NATO allies had trained to defend their country. He said the presence of this military force meant that a Taliban takeover would not be “inevitable.”

On Monday, Biden blamed Afghanistan President Ashraf Ghani for convincing him that the Afghan army would stand up and fight.

In July, when asked about intelligence services‘ warning that Afghanistan would fall to the Taliban, Biden denied that was the case.

And when asked about comparisons between the withdrawal from Afghanistan and the fall of Saigon at the end of the Vietnam War in 1975, Biden vehemently insisted that we would not see a repeat of helicopters pulling hordes from a U.S. Embassy.

“The Taliban is not the south—the North Vietnamese army,” Biden said. “They’re not—they’re not remotely comparable in terms of capability. There’s going to be no circumstance where you see people being lifted off the roof of an embassy in the—of the United States from Afghanistan. It is not at all comparable.”

After the events of the weekend, one can justly ask if what we are now seeing in Afghanistan is actually worse than the fall of Saigon.

Was Biden’s July press conference the least accurate and most clearly and quickly debunked news conference in American presidential history?

This rolling catastrophe should hardly inspire confidence in an administration that billed itself as the one bringing the “adults” back in the room, the one that would “build back better.”

Instead, it’s one of self-made disasters and blame-shifting.

We were also assured that the southern border was secure, and that the surge in illegal immigration after Biden took office was seasonal. In July, typically a time when border crossings are down due to heat, we saw the highest numbers in over 20 years.

In a statement issued Saturday, Biden made the excuse that the Afghanistan withdrawal’s haphazard nature was a result of commitments made by the previous administration, despite the fact that he had already extended the withdrawal timetable.

He simply repeated this line in Monday’s speech.

The excuse beggars belief as Biden eagerly reversed other Trump policies as soon as he took office. If the “Garden of American Heroes” was worth the time to cancel almost immediately upon taking office, surely the conduct of a complex and dangerous military operation launched under a predecessor was worth adjusting, depending on evolving circumstances.

Political scientist and foreign policy expert Walter Russell Mead writes that the Biden administration will now have to deal with the “worst-handled foreign-policy crisis since the Bay of Pigs and the most devastating blow to American prestige since the fall of Saigon.”

At least President John F. Kennedy took “sole responsibility” for the Bay of Pigs disaster, rather than blaming his predecessor, President Dwight Eisenhower.

At this point, the best we can hope for from the Biden administration is to control the damage of its blundering as best as possible. Biden’s refusal to accept responsibility is not the response of an adult in the room. And it hardly sustains confidence in an administration that is flailing on multiple fronts.

If anything, the president’s rhetoric affirms the weakness of a tottering regime that is unable to tackle the crises that beset the nation and unwilling to admit it doesn’t have the answers.