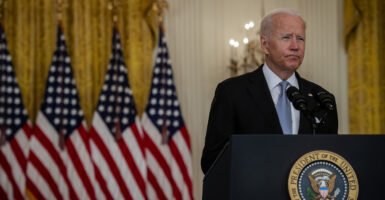 President Joe Biden hurriedly helicoptered back to Washington, D.C., from Camp David on Monday to attempt to explain the disaster that unfolded in Afghanistan, which is the direct result of his decision to remove all U.S. forces and support personnel.

Instead of explaining what went wrong, Biden declared that he “did not regret” his decision, and spent the bulk of his 19-minute speech deflecting blame for the ongoing fiasco onto Afghan government leaders, the Afghan Army, and prior administrations—essentially finding fault with everyone, except himself and his administration.

In a speech that would have more appropriately been based on contrition and humility, Biden instead delivered a series of mistruths designed to portray his decision in the best possible light. Here are five statements that stood out as the most egregious.

1. “We’ve developed counterterrorism over-the-horizon capability that will allow us to keep our eyes firmly fixed on any direct threats to the United States in the region and to act quickly and decisively if needed.”

This statement was crafted to allay fears that now that America has left, we won’t be able to continue to influence events in Afghanistan. It’s incorrect. With the Taliban now in complete control of the country, America’s ability to understand what is going on will be even less than what it was pre-9/11.

Any Afghans who might previously have been inclined to provide human intelligence on events in the country will recognize that helping the U.S. comes at their own peril. The U.S. ability to influence events on the ground in Afghanistan has been returned to what President Bill Clinton had when he launched cruise missiles from the Arabian Sea into Afghanistan in 1998 at tent encampments housing terrorists.

To strike Afghanistan will now require multihour flights from Qatar or carrier ships in the Persian Gulf, and will have to be done without eyes on the ground.

2. “There was only the cold reality of either following through on the agreement to withdraw our forces or escalating the conflict and sending thousands more American troops back into combat in Afghanistan, lurching into the third decade of conflict.”

Biden sought to paint his choices as binary: either withdraw or send thousands more troops to fight the Taliban. But there was already a third option, which was already working.

In 2014, then-President Barack Obama declared the combat mission in Afghanistan over. At that point, the U.S. military began operating in a train-and-assist and counterterrorism role in Afghanistan, with the Afghan army in the lead. Truly, Afghanistan remained a dangerous place, but there was no potential that thousands more U.S. troops would be required to go into combat.

The Afghan army, with U.S. support, was standing and fighting the Taliban. Military leaders had advised that they thought that with 2,500 troops they could sustain the status quo in Afghanistan. What passed for the status quo in 2020 looks pretty attractive compared to the dumpster fire that is Afghanistan today.

3. “I know that there are concerns about why we did not begin evacuating Afghans, civilians sooner. Part of the answer is some of the Afghans did not want to leave earlier—still hopeful for their country.”

Maybe there was some small number of Afghans who remained hopeful, but most were hoping to leave, and today are stranded. In July the U.S. had a visa application backlog of 18,000 Afghan translators and others who wanted to leave. The effort to get those people who had risked their lives to help the U.S. military should have started much earlier and gone much faster.

4. “The truth is: This did unfold more quickly than we had anticipated.”

Maybe the rapid advance of the Taliban surprised a White House who wanted to believe otherwise, but the potential that the Taliban could quickly retake Afghanistan was a commonly shared belief among the intelligence community and the Pentagon.

Intelligence agencies began to warn of a potential Taliban takeover soon after Biden’s decision to conduct a total withdrawal in April. Military leaders knew that once U.S. support was removed, including the vital contactor support that kept the Afghan air force in the air, there was a strong potential of collapse.

Of the mistruths uttered by Biden, these were among the most galling. The Afghan army has been fighting and taking casualties in its war that would have made even the most hardened warrior blink. Casualties among the Afghan army are estimated to be 69,000 killed, more than America suffered in the Vietnam War.

The Afghan army did not stop fighting until it realized it had been abandoned, its logistics and air support stopped when America pulled out the 18,000 contractors who had been supporting its efforts.

Americans have eyes. They can see the events as they unfold in real time on TV. They intuitively can tell when they are not getting the full story. This week, a profound sadness has gripped the nation as we watched America abandoning a country and the people that stood next to the U.S. during tough times. When faced with a disaster like we saw this week, they don’t want excuses, finger-pointing, or half-truths.