Running Away From a ‘Nation-Building’ Mess 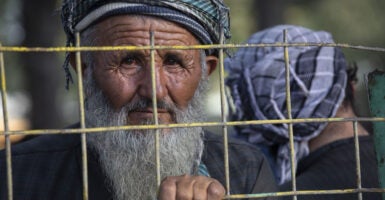 Biden evidently forgot the failures of foreign policy under Obama and immediately went back to the old playbook of walking away and seeing what happens. Pictured: A 70-year-old man from the Balkh province of Afghanistan looks through a fence at a makeshift camp for refugees in Kabul, as a growing number of people displaced by the Taliban flood into the capital to escape the Taliban takeover of their provinces. (Photo: Paula Bronstein/Getty Images)

Where America got Afghanistan wrong is “nation-building.” That’s a myth. Nations don’t build nations. Nations rebuild themselves. President Joe Biden, predictably, learned the wrong lesson. The opposite of nation-building is not running away. It is being realistic.

After World War II, Japan rebuilt Japan. West Germany rebuilt West Germany. Sure, America helped, but you can’t help a people that aren’t willing or able to help themselves. These countries cleared the rubble and got to it. They also had an advantage. They were not being invaded while they were trying to rebuild. Not so Afghanistan.

Who can argue with the decision to oust the Taliban, the bastards that hosted the evildoers responsible for 9/11?

But after that we entered into a long period of trial and error—mostly error.

Afghanistan could never be rebuilt like Germany or Japan as long as the Taliban could continually cross over from Pakistan and threaten a comeback. There were few good options. President George W. Bush wanted to surge and seal the border. He left office before trying. President Barack Obama came in and made a half-hearted effort so he wouldn’t look weak. His heart wasn’t in it. He gave the military half the time and half the troops it needed.

Obama would have preferred to walk away like he did with other problems like Iraq, Syria, and Libya. But with ISIS overrunning Iraq and Benghazi, he couldn’t afford to just pull the rug and see what happened. He happily handed the mess off to President Donald Trump.

Trump recognized nation-building in Afghanistan was nonsense. He also accepted the U.S. had important interests. We didn’t want the country to turn into a terrorist Disneyland again that might attack us. Nor did we want the troubles of Afghanistan to destabilize South Asia. Nor did we want to look like a loser to the Taliban. These would just create another set of serious problems.

Trump scoped forces down to the minimum to deter the Taliban and protect U.S. interests and started outcome-based negotiations with the Taliban, where our next steps would be based on it fulfilling its promises. Troop numbers were minimal.

We should have kept it this way—a small peacekeeping contingent to back up ­diplomacy.

Biden evidently forgot the failures of foreign policy under Obama and immediately went back to the old playbook of walking away and seeing what happens. He probably suspected Afghanistan would collapse, as the military warned him. No doubt he thought the Taliban would wait until the U.S. was gone. Of course, it didn’t.

Why would it pass up the opportunity to humiliate ­America?

This article was first published by the New York Post.