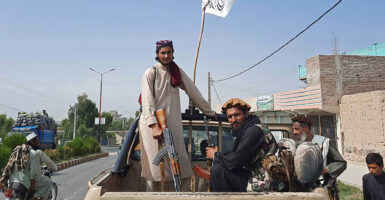 After President Joe Biden ordered a total withdrawal of American troops from Afghanistan, the Taliban seized power in its biggest victory since 9/11. Pictured: Taliban fighters drive an Afghan National Army vehicle through the streets of Laghman province on Aug. 15, 2021. (Photo: AFP/ Getty Images)

President Joe Biden defended his decision to order a total United States withdrawal from Afghanistan, stating, “Our only vital national interest in Afghanistan remains today what it has always been: preventing a terrorist attack on American homeland.”

Although that is true, it is also true that the U.S. has a vital interest in protecting American lives.

Biden’s speech Monday glossed over the short-term risks to the lives of American civilians stranded in Afghanistan by the rapid and total military withdrawal, as well as the long-term risks that the pullout poses for U.S. counterterrorism policy in the global struggle against Islamist terrorism.

The fundamental cause that triggered the 2001 U.S. invasion of Afghanistan—the Taliban’s close ties to al-Qaeda terrorists determined to kill Americans in serial mass murders—remains a dangerous flashpoint.

The Taliban now has returned to power, without cutting ties to al-Qaeda as supposedly required under an illusory “peace agreement,” which really was a diplomatic fig leaf cloaking the unconditional withdrawal of the U.S.-led coalition.

The debacle in Afghanistan will inflame and embolden Islamist militants around the world, many of whom had been discouraged by the defeat of the ISIS “caliphate.” The Taliban’s triumph is their biggest victory since 9/11.

Just as a previous generation of jihadists was energized by the Soviet defeat in Afghanistan, militants today will be energized by the Taliban’s victory. Al-Qaeda, which is closely intertwined with the Taliban, will find it easier to recruit, raise funds, and train followers for future operations, as will many other terrorist groups.

The Taliban released hundreds of foreign militants from jails, including members of al-Qaeda and ISIS, and their numbers could soon swell further. Afghanistan will become a magnet for foreign jihadists who hope to transform it back into a terrorist Disneyland.

To make matters worse, an estimated 10,000 American citizens remain trapped in and around Kabul, unable to make their way to the airport. As many as 30,000 more may be stranded outside of Kabul.

The Taliban reportedly agreed to a two-week grace period for foreign countries to evacuate their citizens from the airport, but Taliban promises frequently are broken.

Taliban leaders undoubtedly would like to maximize American humiliation during the chaotic evacuation. Even if they actually fulfill their promises of safe passage for Americans, they are likely to do little to prevent their al-Qaeda allies or other terrorist groups from seizing American hostages to advance their own agendas.

Criminal groups also are likely to exploit the chaos to kidnap Americans to extract ransom payments.

Although the fall of Kabul has been compared to the fall of Saigon, perhaps a better comparison is the 2014 collapse of the Iraqi army in the face of the ISIS onslaught.

Both crises were preceded by unwise total U.S. military withdrawals. And unlike the fall of South Vietnam, both crises strengthened terrorist groups focused on killing Americans.

As vice president at the time, Biden played a leading role in pushing for a total U.S. withdrawal from Iraq, against the advice of the U.S. military and intelligence officials. The results of the 2011 total pullout from Iraq were predictable and in fact were predicted.

The U.S. military withdrawal undermined Iraqi military, intelligence, and counterterrorism capabilities and created a vacuum that Iran filled by exploiting sectarian tensions, which also enabled the growth of ISIS.

Although the Obama administration later was forced to reverse course in 2014 and redeploy U.S. military forces to defeat ISIS in Iraq and Syria, the rise of ISIS inspired bloody terrorist attacks by Islamist militants around the world.

To prevent ISIS from rising again, the U.S. retained a residual force of 2,500 troops in Iraq. The same number of troops were stationed in Afghanistan, before Biden decided to pull the plug.

As in Iraq, Biden disregarded the advice of military officials, who argued that a small residual force was a sustainable option that could help stabilize the situation at a relatively low cost, just as small U.S. military contingents helped stabilize Iraq and eastern Syria.

The resulting debacle is a self-inflicted stain on America’s reputation, a humanitarian catastrophe, and a major setback in fighting terrorism. The global jihadist movement is likely to be energized and emboldened by the Taliban’s victory, just as it was by the initial success of ISIS.

The Biden Administration claims that it can adequately monitor, deter, and defend against terrorist threats based in Afghanistan from outside the country. But the credibility of this claim has been severely devalued by the administration’s stunning failure to anticipate the severity of the risks inherent in its rush to exit the country.

The Pentagon already is warning that terrorist networks could reestablish themselves in Afghanistan faster than expected due to the swift Taliban victory.

The disastrous withdrawal from Afghanistan raises disturbing questions about the president’s judgment and the competence of his administration.

Unfortunately, it is too late to salvage the situation by reversing course now in Afghanistan. The best that can be hoped for is to rapidly evacuate Americans, other foreigners, and as many Afghan allies as possible, before they are targeted for death or held hostage by the Taliban and its foreign terrorist accomplices.

The Taliban once again has taken Afghanistan hostage to its medieval Islamist agenda. Sooner or later, it will be caught red-handed again supporting terrorist attacks on Americans.

At that point, the U.S. will find its counterterrorism options to be limited to ineffective half-measures. Only then will the full national security costs of the Biden administration’s risky gambit come into focus.

Biden wanted to quickly end the war in Afghanistan, just as he pushed for a total pullout from Iraq. But the fastest way to “end” a war is to lose it.

Biden has tremendously downplayed the security risks of losing the war in Afghanistan, as well as the humanitarian and human rights costs of renewed Taliban rule. But he will end up scrambling for the remainder of his administration to contain and offset the unintended toxic legacy of his reckless retreat from Afghanistan.