Debacle in Afghanistan Symptom of Confusion at Home 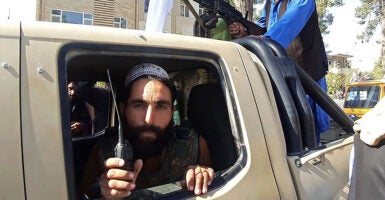 America's withdrawal from Afghanistan is surrounded by a perception of confusion, weakness, and humiliation. Pictured: Taliban fighters along the roadside in Herat, Afghanistan's third-biggest city, after government forces pulled out the day before following weeks of being under siege. (Photo: AFP/ Getty Images)

President Joe Biden was right in his speech to the nation about our withdrawal from Afghanistan, that a long legacy of American involvement there preceded him.

But across the board, in domestic as well as foreign policy, any new president inherits realities that precede him. The issue confronting every president is what principles and policies will he put in place to deal with these existing realities that will define his administration.

Most clear now is that America’s withdrawal from Afghanistan is surrounded by a perception of confusion, weakness, and humiliation.

For anyone who believes that our nation should be a beacon of strength for freedom in the world, that beacon has been deeply tarnished.

According to The Jerusalem Post, these are the nations that will most benefit from this moment: Qatar, Russia, China, Pakistan, Turkey, and Iran. According to the Post, “Most of these countries have hosted the Taliban or tacitly backed them.”

In other words, this round has been won by forces in the world for whom freedom is not a value.

Biden in his remarks said, “We went to Afghanistan almost 20 years ago with clear goals: get those who attacked us on Sept. 11, 2001, and make sure al-Qaeda could not use Afghanistan as a base from which to attack us again.”

This is inaccurate. Months after the attack on Sept. 11, 2001, President George W. Bush defined a two-pronged strategy of retaliation in his State of the Union address. One, “Shut down terrorist camps, disrupt terrorist plans, and bring terrorists to justice.” This was accomplished in our successful military incursion in Afghanistan.

But second, “We must prevent the terrorists and regimes who seek chemical, biological, or nuclear weapons from threatening the United States and the world.”

Bush rightly noted that Afghanistan could not and cannot be viewed in isolation from forces in the world that hate us and hate our ideals. This humiliation of our nation in the current withdrawal from Afghanistan strengthens those forces.

Although Biden decided to continue the process of withdrawing from Afghanistan, he reversed President Donald Trump’s withdrawal from the deal with Iran, and Biden’s deal strengthens rather than weakens Iran and creates a path leading to nuclear capability of this dangerous and threatening nation.

But most critical is to appreciate that we cannot succeed in defending our nation abroad if we are not clear at home who we are.

President Ronald Reagan observed, “While America’s military strength is important … I’ve always maintained that the struggle now going on for the world will never be decided by bombs or rockets, by armies or military might. The real crisis we face today is a spiritual one; at root, it is a test of moral will and faith.”

It is here that Biden’s credibility is so deeply in question.

Under the leadership of this administration, the values that Americans have always known that protect individual freedom and protect God-fearing Americans—certainly those that understand this as Christianity—are on historically shaky ground.

Cancel culture and wokeness limit our ability to speak and run our private lives and businesses freely. The values that have sustained marriage and family and protect the unborn have been dangerously weakened.

Government expansion and incursion into private life is unprecedented. Per the Hoover Institution’s John Cogan, if Biden plans find their way into law, “for the first time in history, more than half of all Americans would be on the federal dole.”

How can we expect leadership in Afghanistan or anywhere else abroad for these American values when we don’t see it at home?