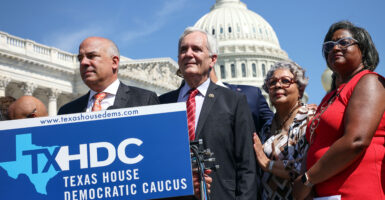 Twenty-two of the Texas Democrats who fled to Washington, D.C, to prevent a quorum in the state House have filed a lawsuit in federal court against Gov. Greg Abbott. Pictured: From left to right, Texas Democratic Reps. Chris Turner, Rafael Anchia, Senfronia Thompson, and Rhetta Bowers speak outside the U.S. Capitol on July 13, 2021, in Washington, D.C. (Photo: Kevin Dietsch/Getty Images)

Twenty-two of the Texas Democrats who fled to Washington, D.C, to prevent a quorum in the state House have filed a lawsuit in federal court against Gov. Greg Abbott.

The lawsuit, which two of the twenty-two Democrats are disputing they signed onto, is embarrassingly bad.

The complaint does not include the usual section for “claims” or “causes of action,” so we have to sift through its pell-mell paragraphs to figure out just what the Texas Democrats are alleging.

First off, they allege a “scheme and conspiracy” between Abbott, Speaker of the Texas House Dade Phelan, and another Texas House member, James White, to “violate the state and federal constitutional rights of the plaintiffs and the classes of citizens they represent by denying rights under the First, Fifth, and Fourteenth Amendments to the U.S. Constitution.”

The alleged goal of this discriminatory conspiracy is to violate the Democrats’ rights to assemble to redress grievances, to speak, to vote, to travel, and to “persuade members of the Congress of the United States to help support them in their quest … .” Considering that the defendants fled together to Washington, where they are now grieving, speaking, and meeting with members of Congress, this alleged conspiracy seems somewhat ineffective.

But the complaint goes on. It alleges that this discriminatory conspiracy arises not only out of “deliberate acts of status discrimination” but also “policies, customs, and practices” that harm “all persons of each individual plaintiff’s status group.” What polices, customs, or practices?  They don’t say.

The Texas Democrats go on to demand a class action on behalf of “others similarly situated.” Who would those people be? They don’t say.

But this nefariously nebulous conspiracy has caused the plaintiffs much harm. Specifically, it has “deprived [them] of liberty for substantial periods of time”; caused them anxiety, distress, discomfort, and embarrassment; and of course, it forced them to spend “substantial sums of money” chartering a plane to travel to Washington.

Accordingly, the plaintiffs demand $5 in actual damages and $10 in punitive damages. Oh, and of course, “reasonable attorneys fees.”

The only thing the Texas Democrats’ attorney, Craig Anthony Washington (who is associated with the Houston firm of DeGuerin & Dickson, which he spells wrong in his signature block), can reasonably expect to receive for this are sanctions.

If Washington is sanctioned, it won’t be unusual for him because his state bar webpage reveals a long disciplinary history that includes several suspensions from the practice of law.

But blame for this embarrassing piece of political theater does not rest on Washington. Smarmy lawyers are a dime a dozen; if he didn’t take this case, someone else would have.

No, blame rests squarely on the Texas Democrats who read this disaster, looked at each other, nodded their heads, and decided that this was something they could be proud of.