Who Should Teach Your Pre-K Toddler, You or Biden and Pelosi? 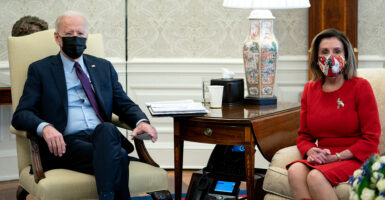 President Joe Biden and House Speaker Nancy Pelosi, D-Calif.—seen here in the Oval Office at the White House on Feb. 5—want to spend close to $165 billion on pre-K education programs over the next 10 years. But parents of toddlers should be wary of what they might be taught. (Photo: Stefani Reynolds/Getty Images)

That was the day after President Joe Biden had presented Congress with his euphemistically titled “American Families Plan,” which calls “for free universal pre-school for all three- and four-year-olds.”

Pelosi’s professed “love” for having parents leave their preschool children in government custody has not diminished since then.

At a press conference last week, she once again spoke about “universal pre-K, which I love.”

In his budget, Biden said that a part of his plan “would provide universal access to high-quality preschool to all three- and four-year olds, led by a well-trained and well-compensated workforce.”

The question here is fundamental: Who should care for and nurture a 36-month-old child? Should it be the government? Or should it be the child’s parents?

The past 80 years have seen a great transformation in both American government and American families. While the size of government grew, the percentage of children born to married parents decreased.

In 1940, when President Franklin Roosevelt was running for an unprecedented third term and the United States had not yet entered World War II, federal spending equaled 9.6% of gross domestic product, according to the White House Office of Management and Budget.

That same year, 3.8% of the babies born in the United States were born to unmarried mothers, according to the Centers for Disease Control and Prevention.

In 2019, the latest year for which the final annual birth numbers are available (and the last pre-pandemic year), 40% of babies were born to unmarried mothers—and federal spending equaled 21% of GDP.

The problem now is not that too many American preschool children are being cared for at home by one of their biological parents in a traditional family. The problem is that too few get to have that experience.

This is what Pelosi “loves” and Biden has targeted with potentially massive federal expenditures.

Will they teach them to respect life? Biden and Pelosi both claim there’s a right to kill an unborn child and want to use federal tax dollars to pay for the killing of unborn children.

Will Biden’s and Pelosi’s pre-K schools treat boys as boys and girls as girls? Both Biden and Pelosi support the Equality Act, which would instruct schools that “an individual shall not be denied access to a shared facility, including a restroom, a locker room, and a dressing room, that is in accordance with the individual’s gender identity.”

The core purpose of putting all 3-year-olds in government-run institutions is to make them dependent on government.

Members of Congress who believe in the traditional family—and the American tradition of liberty—should make sure that this element of the Biden budget is never made American law.