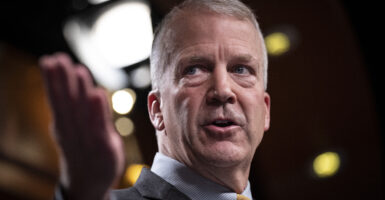 Sen. Dan Sullivan is working hard to ensure that the necessary votes are attained to include the amendments, which aim at protecting the religious liberties of Americans, to the so-called Respect for Marriage Act. Pictured: Sullivan speaks during a news conference at the U.S. Capitol Aug. 2 (Photo: Drew Angerer/Getty Images)

A Republican senator who voted for the so-called Respect for Marriage Act supports Republican Utah Sen. Mike Lee’s and Republican Oklahoma Sen. James Lankford’s amendments to the legislation, The Daily Signal has learned.

Republican Alaska Sen. Dan Sullivan is working hard to ensure that the necessary votes are attained to include the amendments, which aimed at protecting the religious liberties of Americans, a person familiar with the situation told The Daily Signal.

Sullivan spokesman Mike Reynard confirmed to The Daily Signal on Friday afternoon that the senator does indeed support both Lankford’s and Lee’s amendments: “Senator Sullivan supports both the Lee and Lankford amendments and has been working hard to ensure that these amendments get votes on the Senate floor.”

None of the other 11 senators responded to requests for comment from The Daily Signal on Friday.

Many of these lawmakers claim that the much-discussed legislation protects religious liberty. But opponents of the bill warn that it “puts a giant target on people of faith.”

Major conservative and religious organizations like the Alliance Defending Freedom and the Religious Freedom Institute have condemned the Respect for Marriage Act. Religious leaders previously warned The Daily Signal that it would hack away at the religious freedom of faith-based groups.

The Catholic University of America said Tuesday that it is aligned with top United States Catholic clergy in opposing the so-called Respect for Marriage Act.

“The Catholic University of America is committed to upholding the teachings of the Catholic Church, which includes the belief that marriage is between one man and one woman,” the university said in a Tuesday statement to The Daily Signal.

“Regarding this specific legislation,” the university continued, “the University stands alongside the United States Conference of Catholic Bishops and their statements from July 2022 and most recently, Nov. 17.”

This post has been updated to include a response from Senator Sullivan’s office.