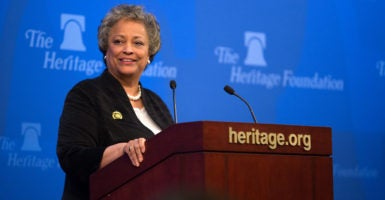 "We will open the hearts and minds and doors of the millions of Americans who really are conservative, but just don’t know it yet," Heritage Foundation President Kay Coles James says in a speech Monday night at the leading think tank's Capitol Hill headquarters. (Photo: Willis Bretz for The Heritage Foundation)

Conservatives must persevere in gracefully countering misinformation from the left that convinces too many Americans liberal policies will improve their lives, the new president of The Heritage Foundation said Monday night in a speech laying out her vision for the leading think tank.

“Unfortunately, many Americans are misinformed,” Kay Coles James said. “Like us, they want liberty, equality, opportunity, but unlike us, they mistakenly believe that those ideals can be achieved by the failed policies of the left.”

Heritage billed the speech, entitled “Imagine America: A Pathway Forward for All Americans,” as an outline of James’ vision not just for the leading conservative think tank but for the nation as a whole.

James, who spoke for 16 minutes, said Heritage will reach out purposefully to Americans of all backgrounds “who really are conservative, but just don’t know it yet.”

She spoke during an invitation-only reception at Heritage’s Capitol Hill headquarters, where the think tank’s leaders also thanked its longtime president, Edwin J. Feulner, for returning to the helm last year during the search that resulted in her selection.

The more than 300 guests included well-known Washington figures such as Attorney General Jeff Sessions, who sat in the front row of Heritage’s Allison Auditorium and moved toward James to shake her hand as she returned to her seat.

In her remarks, which begin at 14:39 in the video, James described becoming Heritage’s president as the culmination of her personal journey and professional career.

James has served over three decades in government, academia, and the private sector.

For the past decade, she also had headed the Gloucester Institute, a leadership training organization in Gloucester, Virginia.

On Jan. 1, she formally took the reins of The Heritage Foundation from Feulner, who introduced her Monday night.

“I inherited scholars and staff that are the most driven and dedicated team that anyone could ever hope to lead,” James said.

“President Reagan paid us a very special compliment when he said, and I quote: ‘Success in politics is about issues, ideas, and the vision we have for our country and the world. In fact, the very sum and substance of the work of The Heritage Foundation.’”

Feulner, who had led Heritage from 1977 to 2013, served again as president during a nationwide search for a new leader following former Sen. Jim DeMint’s resignation as president in May.

Heritage’s board of trustees, which James joined in 2005, unanimously elected their colleague after the search unexpectedly led to her, board Chairman Thomas A. Saunders III said in announcing the choice in December.

James, only the sixth president in Heritage’s 45-year history, had led the search committee assigned to identify candidates for president until she was identified as one. (Taking over was former Attorney General Edwin Meese, Heritage’s Ronald Reagan distinguished fellow emeritus, also present Monday night.) Housing and Urban Development Secretary Ben Carson and Sens. Ted Cruz, R-Texas; Joni Ernst, R-Iowa; and Orrin Hatch, R-Utah, were among those in the audience for “the passing of the baton,” as Genevieve Wood, Heritage’s senior communications adviser, called it.

Also spotted were organization CEOs and presidents such as Jay Timmons of the National Association of Manufacturers, Penny Nance of Concerned Women for America, Morton Blackwell of the Leadership Institute, Roger Ream of the Fund for American Studies, Tracie Sharp of the State Policy Network, and Adam Meyerson of the Philanthropy Roundtable.

With Heritage policy victories over the years ranging from missile defense and tax cuts to school choice and welfare reform, James said, the think tank is now “an unstoppable force in American conservatism.”

But she said she sees no shortage of challenges, such as the opioid crisis and failing schools, that “strike directly at the core principles this institution holds so dear: free enterprise, limited government, individual freedom, traditional values, and national security.”

Recalling Abraham Lincoln’s words, James, who grew up poor amid segregation, warned that only “destruction from within” could result in the fall of the American nation.

Heritage, she urged, must be seen by more Americans as “a bulwark against that destruction and … a battleship for liberty,” adding:

Fortunately, our fight resonates in the hearts and minds of virtually every American. Having grown up in the heat of segregation, I know America’s capacity for compassion because even then there were those who stepped forward, and I experienced their kindness in so many wonderful ways. In fact, I’m standing here because of the decency of so many, decency that continues to drive our nation forward today.

Unfortunately, many Americans are misinformed. What pulses in their hearts is honest, but what resonates in their minds is so often untrue. Like us, they want liberty, equality, opportunity, but unlike us, they mistakenly believe that those ideals can be achieved by the failed policies of the left.

As a result, they simply don’t know that liberal policy threatens the very ideals they treasure, or that conservative policy upholds them.

There is “nowhere” Heritage won’t go, she said to applause, because everyone can be “helped by free enterprise, limited government, individual freedom, traditional values, and a secure nation.”

She pledged to take Heritage’s practical conservative solutions to college campuses and minority neighborhoods, to suburban and urban centers.

“We can do this. We will engage without seeking to enrage. We will always be tough, but never mean. We will grow the congregation and not just preach to the choir,” James said, sparking laughter and adding:

We will open the hearts and minds and doors of the millions of Americans who really are conservative, but just don’t know it yet. Together we will build an America shaped by our founding principles and ready for the future.

Imagine with me for a minute what that America will be like: Imagine an America where free markets reign so there are enough jobs for everyone to realize their dreams. Imagine an America with a strong national defense where our borders are secure, our communities are healthy, and our streets are safe.

Imagine an America where civil society flourishes, life is protected, families are whole and every child no matter their race, religion, income, or address gets a great education. And imagine an America where liberty, equality, and opportunity aren’t just the gifts that you and I inherited; they’re the endowment we pass on to future generations. That America, the one we imagine, is the one we can build today.

And personally, she said, she refuses to pass along a less-free America to her five grandchildren, who led the Pledge of Allegiance that opened the event.

“Nor do I intend to ever forget George Washington’s guidance, that we should always humbly implore the Almighty’s protection and favor,” she said. “And so together and with God’s grace, we will fight for what we believe in because, my friends, America is worth fighting for.”