As Russia Pledges Withdrawal, Who Are the Real Winners of the Syrian Cease-Fire? 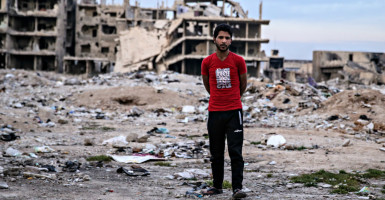 A Syrian stands at the border of the Al-Dohanya neighborhood in Damascus, an area liberated by the ceasefire agreement between Syrian government forces and rebels controlling the district. (Photo: Valery Sharifulin/TASS/Newscom)

AMMAN, Jordan—Russia announced its withdrawal from Syria as peace talks among all sides to the Syrian war commenced in Geneva, one day before the fifth anniversary of the first protests against the Assad regime.

The talks come some two weeks after the cessation of hostilities brokered by the U.S. and Russia continues to hold despite mutual accusations of violence on all sides.

Russia announced late Monday evening it would begin to withdraw operational forces from Syria. It remains to be seen how many troops and how much hardware Russian President Vladimir Putin will pull out of the conflict-ravaged country, especially as Russia intends to maintain its air base in Latakia and a naval base at Tartus.

Even without a strong Russian military presence, Putin will continue to provide weapons to and financially support Syrian President Bashar Assad’s cash-strapped regime. The Russians will be able to resume airstrikes any time, according to reports.

Two terrorist groups look to be the big winners out of the current situation: Jabat al-Nusra, which has links to al-Qaeda, and the Islamic State, or ISIS.

Perhaps more damaging to America’s strategic position both in the region and globally, other nations now see Russia as an equal to the United States.

The silver lining over the course of the past two weeks surely has been the delivery of humanitarian aid to besieged areas in Syria. Approximately 150,000 civilians living in besieged areas have been able to gain access to life-saving medications, food, and support, according to reports.

The talks in Geneva hinge on the fragile cease-fire in Syria holding. Who is a terrorist and who is not a terrorist is an important distinction for the shaky truce in Syria.

The cease-fire has been supported by all major parties, including the Assad regime and the High Negotiations Committee, which includes some 97 opposition groups that agreed to halt the violence for a minimum of two weeks.

The deal does not include terrorist groups—or, as Putin puts it, “ISIS, Jabat al-Nusra, and ‘other terrorist organizations.’”

Assad has had the support of Iranian ground forces, Hezbollah, and Russia as the Syrian dictator continued to target groups he rightly or wrongly defines as terrorists to suit his own strategic interests.

The current situation in Syria favors the terrorists. Many smaller ISIS-allied groups and Jabat al-Nusra fighters likely will take cover and operate behind civilians—the very population to whom the cessation of hostilities is meant to bring humanitarian relief. Violations on Both Sides

Opposition media outlets and rebel militia spokesmen aren’t the only groups claiming violations by the Assad regime or Russia. International media, including CNN, have reported instances of attacks across the country.

One family’s home in rebel-held Aleppo was demolished by an airstrike about 30 hours after the cease-fire went into effect. The most deadly attack on civilians in Aleppo came March 11, after an air raid killed seven civilians, the British-based Syrian Observatory for Human Rights reported.

To collect evidence of the violations, a civilian advocacy group, the Syrian Campaign, created a crowdsourcing mechanism to monitor the cease-fire.

Another volunteer search-and-rescue humanitarian group operating in local communities throughout Syria collects images and videos and aggregates casualty and attack data through on-the-ground sources, including the “white helmets” of Syria Civil Defense.

The High Negotiations Committee, the main group representing the opposition to the Assad regime, also submitted an official letter to the United Nations outlining what it alleges to be violations of the agreement.

Trends in the South

Over the course of the five-year civil war, Assad has had to rely increasingly on his Iranian friends for weapons, ground troops, and money. Recent regime gains in opposition-held areas in southern Syria near the Israeli border include a key strategic supply route through Sheikh Miskeen in Daraa province. These gains were in fact so significant that Israel sent an envoy to Russia to try to win a halt to its air campaign along the southern front.

Just to the east, Jordan shares equal concern over the balance of power in southern Syria. With an increase in the Assad regime’s fighting that likely targets Western-backed forces and not the al-Nusra Front, ISIS affiliates, or potential terrorist sleeper cells, the possibility of a power vacuum that would greatly benefit ISIS is troubling to security officials in Jordan.

Western-backed rebel groups currently control all border checkpoints along the Syria-Jordan border. However, if these groups continue to fall into disarray under pressure from attacks by the regime, Iranian forces, and Russian airstrikes, they easily could fall into the hands of extremist factions.

For Jordanian security officials, this is a deeply concerning scenario.

According to reports, the Russian intervention in the South dramatically shifted the dynamics, ultimately strengthening extremists and weakening the moderates. Even if a lull in fighting comes, these scenarios ultimately could take place.

Like Israel, Jordan sent a high-level military delegation to Moscow to convince the Russians to halt airstrikes in the South. That diplomatic mission is believed to have largely failed in securing any binding assurances from Putin.

Jordan, unlike Turkey, largely has gone untouched by ISIS terrorism. But fear is increasing that ISIS attacks eventually could take place if the southern front is not delicately controlled.

To get an idea of how #Russia interprets scope of upcoming ceasefire, see this map.

Jordan is a key Arab partner in the anti-ISIS coalition. Last week, Jordanian security officials killed seven ISIS-linked terrorists in a raid in Irbid. Jordan’s second most populous city, Irbid is about nine miles from the Syrian border.

As the negotiating sides in Geneva wear down the peace process through red line pronouncements—“Assad must go” or, alternatively, “Assad must stay” —the biggest loser is likely to be what’s left of the Western-backed opposition to Assad.

In the days leading up to the cease-fire, the Assad regime dramatically increased airstrikes, attempting to grab as much territory as possible. This tactic may or may not have been successful, but the slow erosion of opposition positions under the guise of the regime’s “targeting terrorists” ultimately will strengthen Assad’s negotiating and strategic position in both Geneva and Syria.

But what does an agreement or political solution to the crisis in Syria mean without the destruction and elimination of ISIS?

If Hezbollah and other Iranian-backed militias, if not the Russians, continue to help the Assad regime wipe out the moderate opposition, ISIS terrorist attacks—such as those in Damascus last month killing 140—will increase in frequency and severity.

Rebel losses likely will lead to power vacuums in areas such as Daraa in the south, creating an opportunity for ISIS or al-Qaeda to destabilize Jordan.