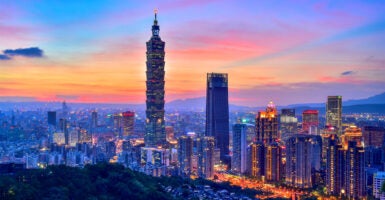 Now is the time for policymakers to prioritize a U.S.-Taiwan free trade agreement. Pictured: The iconic Taipei 101 building rises above the skyline of Taipei, Taiwan. (Photo: Kecl/Getty Images)

In a recent joint letter to U.S. Trade Representative Katherine Tai, Sen. Tom Carper, D-Del., chairman of the Senate Finance subcommittee on international trade, customs, and global competitiveness, and Sen. John Cornyn, R-Texas, ranking member on the trade subcommittee, made a case for strategic trade reengagement in the Indo-Pacific region.

The two senators pointed out, “Our current trade policy in the Asia-Pacific region is in need of a strategic direction that includes robust engagement with our allies in the region.”

Indeed, Washington should build on the broad momentum of recent decades to increase economic freedom and dynamic growth around the world, not disrupt it with renewed protectionist trade policy triggered by the COVID-19 pandemic.

If there ever was a time to adhere closely to the principles of economic freedom, this is it. Any notion that America can deal with the ongoing pandemic and make the much-needed economic rebound without tapping into free trade is wishful thinking.

Currently, the United States has 14 preferential trade agreements with 20 countries. Expanding America’s pragmatic nexus of free trade agreements should be a policy priority. Advancing strategic, forward-looking trade policy would reinforce the economic dynamism and innovation that will lead to an expanded network of free markets and greater economic ties to like-minded and willing partners.

To that end, the case for prioritizing a U.S.-Taiwan free trade agreement is strong.

The recent Interim National Security Strategic Guidance by the Biden administration underscores that the United States “will support Taiwan, a leading democracy and a critical economic and security partner, in line with long-standing American commitments.”

For many years, The Heritage Foundation has called for greater economic cooperation and broader dialogue between the U.S. and Taiwan through a bilateral trade and investment pact, which is the logical next step for elevating dynamic economic interaction between the two countries.

More noteworthy is that in August 2020, Taiwanese President Tsai Ing-wen removed the substantive obstacles to starting free-trade negotiations with the U.S. Taking decisive policy action, Tsai unilaterally addressed American complaints over market access for beef and pork imports, which long had been a major complaint of the U.S. government and a barrier to establishing a free trade agreement with America.

It is in the interest of Washington to welcome and take the offer of Tsai to enter into negotiations for a free trade agreement. Clearly, the U.S.-Taiwan relationship is one worth investing further in over the next decade. Such a practical, more institutionalized economic partnership would reinforce other vital diplomatic links between the two long-time partners.

During the meeting with Tsai in Taipei on April 15, former Sen. Chris Dodd, who was leading a bipartisan delegation to Taiwan, highlighted that the delegation was formed at the personal request of Biden to reaffirm the U.S.’ commitment to its partnership with Taiwan, which is “stronger than ever.”

Beyond strong political words and gestures affirming U.S. support for Taiwan, formally starting free trade agreement negotiations by elevating the Trade and Investment Framework Agreement talks with Taiwan, which have been in place since 1995, would provide a real, concrete demonstration of America’s commitment to Taiwan.

That will make the U.S. partnership with Taiwan truly stronger than ever.