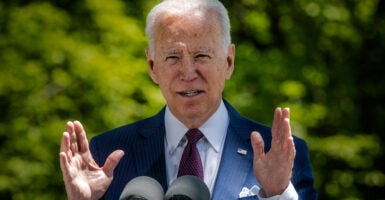 The administration requested nearly $103 billion for K-12 and higher education—a 41% funding increase—for the Department of Education.

This proposal is just one piece of a massive education spending spree that began a year ago and shows no sign of stopping.

Consider some of the recent spending packages that have already dedicated enormous amount of money to public education:

Spending bill 1: The CARES Act, signed into law by the Trump administration in March 2020, gave $13 billion for K-12 schools and $14 billion for higher education. It also included a $3 billion discretionary fund for governors. Total: $30.7 billion.

That package also included $4 billion in new spending for governors to use at their discretion for education-related priorities. Total: $82 billion.

Less than a year after the first spending bill was signed into law, the Biden administration added yet another relief package, which outspent the first two bills’ education spending by nearly $60 billion.

Spending bill 3: The Biden administration’s American Rescue Plan, signed into law in March, included $130 billion for elementary and secondary schools, approximately $35 billion for institutions of higher education, and a $5 billion discretionary fund for governors to use on education. Total: $168 billion.

The total for the three spending packages is about $281 billion. That’s nearly four times the Department of Education’s 2020 discretionary budget, which stood at $72 billion.

Now, the Biden administration hopes to supercharge spending through two “infrastructure” packages, the first of which would spend an additional $260 billion on education.

That sum, combined with the $282 billion in emergency relief packages since March 2020, would equate  to a mind-boggling half-a-trillion dollars in new education spending if the infrastructure proposal becomes law. And that figure doesn’t even include the president’s new budget request.

To cover this astounding tab, Congress would need to devote the revenue from the average taxes paid by more than 1.23 million Americans over the course of their entire lives.

These proposals will only saddle the future taxpayers they aim to help with crippling national debt.

To make matters worse, the president’s budget request only props up and expands funding for institutions that are already encumbered with red tape and fail to efficiently meet the ever-changing needs of families.

For instance, the president’s budget request doubles Title I funding, increasing spending on it by $20 billion. This major K-12 program, however, funnels education dollars to schools, rather than students, providing families with no options if their assigned school does not meet their child’s needs.

At the same time, the notoriously complex funding mechanisms of Title I—likely understood by only a handful of experts—reward states that equalize district spending even though research does not show that that spending model is effective.

That means that large per-pupil allocations under Title I do not necessarily correspond to states with significant populations of Title I-eligible children.

To have existing Title I dollars better meet the needs of eligible students, policymakers should allow for portability of the per-pupil amount spent through the Title I program, following eligible students to learning options of choice or enabling them to pay for tailored education services.

According to a recent report released by the University of Arkansas, portable education funds are associated with impressive gains on the National Assessment of Educational Progress.

Florida’s five school choice programs with nearly 161,000 children enrolled as of the fall of 2019 illustrate how portable education dollars can make the difference in student’s educational outcomes.

Specifically, Florida’s eighth-graders from low-income families gained more than a year’s worth of learning in math and reading on the National Assessment of Educational Progress, whereas their low-income peers nationwide gained less than a year in those subjects.

Instead of increasing Title I spending, policymakers should make existing Title I funds portable so low-income families can spend their education dollars on approved education expenses, such as tutors or individualized private courses.

Other federal programs, such as Head Start and the Individuals with Disabilities Education Act, would similarly benefit from portability, enabling families to choose their education providers, rather than being assigned to one, or dependent on a distant federal program.

The president’s budget request, if implemented, would only saddle future taxpayers with an oppressive tax burden, plunging the United States deeper into debt.

Instead of increasing spending (and by extension federal control over education), Congress should give families control over existing education spending.

The alternative is strapping future generations with untenable levels of debt for programs that have little demonstrated value.

Have an opinion about this article? To sound off, please email letters@DailySignal.com, and we will consider publishing your remarks in our regular “We Hear You” feature.