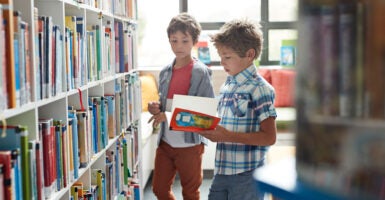 Under "A PLUS,” states could assume complete fiscal control of $26 billion in federal funds spent annually on programs authorized under the federal Elementary and Secondary Education Act and could use the funds for any state-authorized education program, such as education savings accounts for families. Pictured: Two brothers browse the stacks of a school library. (Photo: Klaus Vedfelt/ Digital Vision/Getty Images)

The latter is a sum double what is spent annually by the federal Education Department on K-12 schools.

The proposal would have continued a failed legacy of ever-increasing federal education spending.

Although it’s true that schools will need resources to make sure classrooms reopen safely, Congress can help achieve this goal through flexibility, rather than massive new infusions of taxpayer cash.

In the past 55 years, the federal government has spent $2 trillion on K-12 education alone through the Elementary and Secondary Education Act. Yet, these federal programs have yet to achieve their intended outcomes, such as closing the achievement gap, which remains a four-year learning difference today.

Increased federal education funding would likely exacerbate existing problems, such as cumbersome regulations and hidden costs. Better policy would be to build upon existing reforms that return education autonomy to the states.

For instance, Congress could build on the flexibility provided in the Coronavirus Aid, Relief and Economic Security Act, which—among other temporary deregulation measures—provided waivers to states allowing for testing flexibility.

Conservatives have long supported the policies in the Academic Partnerships Lead Us to Success (“A PLUS”) proposal, which would allow states to opt out of federal programs under the Elementary and Secondary Education Act.

Under A PLUS, states could assume complete fiscal control of $26 billion spent annually on programs authorized under the Elementary and Secondary Education Act, and could use the funds for any state-authorized education program, such as education savings accounts for families, or for purchasing additional personal protective equipment for schools.

A PLUS requires states to uphold all federal civil rights laws, to disclose their fiscal controls and accounting procedures, and to provide an assurance that they will advance education opportunities for the disadvantaged.

States must also demonstrate how they will be accountable to taxpayers and parents.

States that adopt A PLUS could shed many of the hidden costs and onerous regulations incurred by federal micromanagement. While the cost of compliance with federal regulations is unknown, the massive growth in administrative staff since federal intervention began indicates a hefty price tag that greatly outpaces the nominal 8.5% share of education financing controlled by the federal government.

For instance, Benjamin Scafidi, the director of Kennesaw State University’s Education Economics Center, noted in “The Not-So-Great Society” that between 1960 and 2016, the number of public school administrators grew by 137%, even though the student body grew by just 40% nationwide.

Those more recent findings build on data from a 1998 federal commission led by then-Rep. Pete Hoekstra, R-Mich., which discovered that state education agencies spent 48.6 million hours complying with federal regulations so that only “65 cents to 70 cents of each federal taxpayer dollar spent on education reach[ed] the classroom.”

The federal foray into education has driven up hidden costs and hampered states with burdensome regulations. Accordingly, Congress should return federal dollars to the states “without burdensome strings attached” as the Hoekstra commission recommended.

A PLUS would do just that, restoring fiscal autonomy to the states dramatically, reducing federal regulations and red tape. States that adopted the proposal could implement their own accountability measures and direct education dollars to where they are needed most.

Such a “right-sizing” of the federal government’s involvement in K-12 education would shift decision-making and accountability away from Washington and closer to the primary stakeholders—namely, parents.

No longer bound by cumbersome administrative costs, states could consolidate their funds and redirect them toward education initiatives that meet the needs of local families.

The current crisis has made clear that one-size-fits-all solutions don’t work, and that states and localities need more autonomy and less federal micromanagement.

The policies contained in A PLUS would restore community control of education to families and would allow more education dollars to reach the classroom. That means more existing dollars in the hands of school leaders, better serving them—and American taxpayers—than another federal bailout.