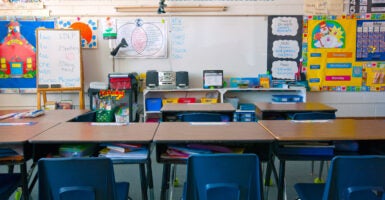 Private K-12 schools would be eligible for a portion of the funding, equivalent to their share of enrolled low-income students. The proposal would allocate an additional $30 billion to higher education, and $5 billion for governors to spend on education as they see fit.

With budget deficits at an all-time high, yet another bailout is something taxpayers simply cannot afford.

Instead of spending more than $100 billion on another education package—before 99% of the funds from the prior bailout provided in the CARES Act have even been put to use—Congress should provide states with flexibility over how existing federal education dollars are spent.

Giving states and school districts the authority to determine how to allocate their existing Elementary and Secondary Education Act funding would equip school leaders with the tools they need to prepare to reopen without continuing to saddle future generations with tremendous debt.

If an additional bailout does happen, at the very least, Congress should allow funds to follow students to schools of choice that are open.

Not doing so will put an already struggling private school sector at a severe disadvantage. Making any new dollars student-centered and portable will enable children from low-income families to participate in innovative learning options that are proliferating, such as education “pods” and microschools while their district schools remain closed to in-person instruction.

That “first, do no harm” to private education should guide any future spending, if it is to occur.

Indeed, dealing with COVID-19 will require resources. But more than 92% of K-12 education spending is financed by state and local taxpayers, meaning solutions must largely come from states and local school districts.

It’s worth putting all of those figures in context. The proposed $105 billion in the HEALS Act dwarfs the Department of Education’s entire fiscal year 2019 discretionary budget, which was $71.4 billion.

Combined with the money already authorized under CARES, federal education bailout money rises to $136 billion—nearly double the agency’s annual discretionary budget. It represents a massive additional federal infusion of spending into a sector where spending had already been on an untenable trajectory for years.

Moreover, as of May 31, states had spent just 1% of their Elementary and Secondary School Emergency Relief Fund allocation, and less than 1% of their Governor’s Emergency Education Relief Fund dollars from CARES, according to the Government Accountability Office.

Education Secretary Betsy DeVos underscored that fact in a July 12 interview, noting that states had distributed only a small fraction of CARES Act funding to schools.

Although K-12 schools have until September to spend their Phase III CARES Act funding, and although the GAO data are more than a month old (meaning states have likely distributed more funding to districts by this point), Congress is attempting to spend more than triple the amount provided in CARES on an additional education bailout before the prior bailout money has even been put to use.

The HEALS Act also includes language establishing an architecture for a federal tax-credit scholarship program. As Education Week’s Andrew Ujifusa explains, “while a separate bill in the suite of proposals authorizes ‘emergency education freedom grants’ to support one-time private school costs and other expenses, they are not provided federal funding in the HEALS Act package.”

Although there are concerns associated with establishing a new federal tax-credit scholarship program, the proposal as currently written is temporary, in response to the virus.

Districts have needed to reprioritize spending for decades, as growth in non-teaching staff, administrative bloat, and unfunded pension liabilities have been squeezing taxpayers for years. While districts may see the new infusion of cash from Washington as a way to put a plug in the budgetary hole that years of bad policy have created, taxpayers in Florida should not have to bail out districts in Chicago or Los Angeles.

Meanwhile, Washington has fueled higher education’s spending problems with ever-increasing federal subsidies, largely in the form of student loans for undergraduate and graduate borrowing on the part of students and parents alike.

Dumping more money out of helicopters onto colleges, to borrow a description from economist Richard Vedder, will not solve the college-cost problem.

Like K-12 districts, college boards of trustees and regents need to direct their universities to tackle program prioritization and reinvest funds in programs that advance their core mission, rather than continuing to engage in a facilities and amenities arms race.