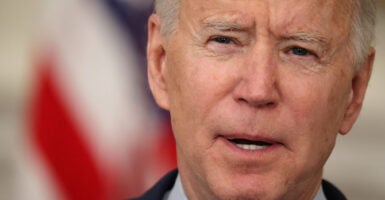 The plan also includes an additional $100 billion to expand broadband, $48 billion for workforce training, and $12 billion for community college infrastructure.

With more than half of school districts across the country still in remote or hybrid mode, your children won’t see the new money, but they’ll be the ones who pay for it. And not only would this package pass enormous debt onto the next generation, it is also replete with problems.

For starters, school infrastructure spending is not the role of the federal government, especially one with a $28 trillion national debt. It is the responsibility of districts—not Washington—to construct and maintain schools.

This proposal’s breathtakingly high costs would come on top of unprecedented federal spending for schools that was doled out through three COVID-19 spending packages last year. When you add together the taxpayer dollars that Congress appropriated for education since March 2020, it comes out to a staggering $282 billion.

Add to this an additional $260 billion from the education portion of Biden’s infrastructure proposal for a total of more than half a trillion dollars in new school spending—all within a 12-month period.

And this is just the beginning. The administration has signaled that a second package—again, supposedly for “infrastructure”—slated for mid-April will include universal preschool, paid family leave, and “free” community college.

Such spending would make Greece blush.

While the Biden administration claims this package is necessary to reopen schools quickly, it’s hard to argue that that is justified, as schools have yet to even spend the money from the previous three spending sprees.

In fact, the Congressional Budget Office estimates that schools plan on spending most of the funds they received through last year’s three spending bills over a year from now, noting that schools wouldn’t spend all the extra money until 2028.

Education scholar Dan Lips has also found that schools do not appear to be in need of quick cash—as of late 2020, state education agencies had yet to spend between $53 billion and $63 billion of the stimulus funds from March and December of last year.

At the same time, districts have been poorly managing their physical resources, leaving buildings vacant, still paying for the upkeep, and not attempting to sell the unused facilities, as observed by Jonathan Butcher of The Heritage Foundation. This is an issue that repeats itself in large districts across the country.

If schools truly are “crumbling” around students, districts should conduct assessments of their empty buildings, and consider whether they should be repaired or simply sold.

Districts have also been engaging in practices that have driven up spending for decades, including a major nonteaching staffing surge. As Kennesaw State professor Ben Scafidi has documented:

From fiscal year 1950 to [fiscal year] 2015, the earliest and most recent years with available data, American public schools added full-time equivalent personnel at a rate almost four times that of student enrollment growth. These additional personnel were disproportionately non-teachers.

District hiring of nonteaching staff was seven times greater than increases in student enrollment. While this has been a boon for teachers unions, these hiring sprees put a tremendous strain on school budgets, and is just one of many areas where public school districts are malinvested.

Federal infrastructure bailouts are unnecessary for addressing school building maintenance issues, which are not the result of a lack of education funding.

Average spending per pupil grew from $8,000 in 1977-78 to nearly $16,000 in 2017-18, adjusted for inflation. Districts need to be better stewards of taxpayer money and prioritize funding to areas of need—including building upkeep.

This new spending boondoggle, if approved, will be just the latest handout to the public education establishment and the teachers unions.