We Hear You: Amnesty for Illegal Immigrants and Other Hot Buttons 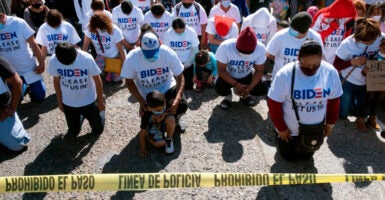 "If people are allowed to break the law without paying the assigned penalty, then why have laws?" Texas resident R.L. Hand writes. Pictured: Migrants seeking to enter the U.S. at the Mexico border demonstrate March 2 at the San Ysidro crossing port in Tijuana, Mexico. (Photo: Guillermo Arias/AFP/Getty Images)

Editor’s note: We have a feeling we’re going to get more mail on the recent surge of migrants to the southern border than on most other topics. So let’s dip into the mailbag at [email protected], sampling this and other concerns.—Ken McIntyre

Dear Daily Signal: I appreciated Fred Lucas’ article on “6 Key Aspects of Biden’s Amnesty Bill.” I thought it quite fitting that the accompanying photograph showed the “Stop the Deportations” truck passing in front of President Joe Biden’s White House.

Of course, we also have the massive “safe buffer” zone now around the U.S. Capitol with 12-foot reinforced fencing and razor wire on top, which extends for several miles and House Speaker Nancy Pelosi approved and had built within two weeks.

Pelosi, the one who decried fences on the southern border to stop illegal immigration, saying they are offensive. Our Capitol now resembles any authoritarian socialist dictatorship. Was this the plan?—Rick MacDonald

Dear Daily Signal: Of course the Democrats want this amnesty bill for illegal immigrants to pass. They are doing everything in their power to cinch future votes for them.

Look at the migrants who are flooding our borders.  Future votes. It’s disgusting.

I am a conservative grandparent who is terrified for the future. We’re turning into a socialist America before our eyes.—Bonnie Osborn, San Antonio, Texas

Dear Daily Signal: You were kind enough to report our dilemma in 2019 (“We Hear You: An Immigrant Couple Explains the Unfairness of Amnesty”). Here we still are, almost 16 years in the United States, full-time, tax-paying employers of a small business that has survived the COVID-19 pandemic—but with no pathway to citizenship.

In fact, to comply with our e-2 investors visa, we need to leave the U.S. every two years for at least 48 hours. We are forced by the rules to leave and obtain a new I-94 exit/entry document.

We can’t go to our native Canada, which is locked down, so we’re flying to the Dominican Republic for three days.

Good Lord willing, we’ll be allowed back in without a big hassle. It’s a catch-22. Anyway, it’s the price we pay to live in the greatest country ever.

Surely sanity will prevail and if the government is going to legalize 20 million people who essentially broke the law to be here, it would give those of us who have played by the rules at least a pathway to citizenship.

I’m copying our Florida state representative, Bob Rommel, who is also a good friend, and we sent a copy of your original article to Sens. Rick Scott and Marco Rubio. I’m not sure, however, that anyone in power will do the right thing for those of us who love this country but feel forgotten.—Gary and Shelley Cahill, Naples, Fla.

Dear Daily Signal: These are people who by U.S. law are in the United States illegally. Why should illegal immigrants be rewarded for breaking the country’s laws?

Secondly, why should President Biden even be considered to have the right to do the things he has presented? No one person in this country should be allowed essentially to change or override any law. If people are allowed to break the law without paying the assigned penalty, then why have laws?

President Trump had the guts to start dealing with illegal immigration according to our laws, which past presidents have chosen to ignore.  Trump was enforcing the laws; Biden is ignoring the fact that they exist.  That is a big difference.

Bottom line, letting people flood into this country while ignoring our immigration laws shouldn’t be up to any one individual.

History shows us that continuing to allow people to illegally enter this country and then ultimately giving them a free pass only encourages others to do this.  That makes no sense whatsoever.—R.L. Hand, Texas

Sadly, Mr. Biden (after 47 years in D.C.) never learned a single thing about correct immigration policy. His six-step plan will act as a huge new magnet that will attract even more illegal entry into the U.S. It also rewards lawbreakers.

Eventually, because most illegal entrants will vote for Democrats, his plan will convert America to a single-party system, destroying our nation.

The correct solution is to assist people in their home nations by transferring safety and economic methods of self-reliance to other nations.

A policy that opens America’s doors fully to the world without limits or penalties, as the president’s does, will make the U.S. just another nation among many other (socialistic) nations, ruining America.—R.C. Arrow

Makes me wonder how many of these 20 million illegal immigrants voted for Joe Biden. We really don’t know, do we? If we do, I’ll take this comment back.—Dave Peck, Kenai, Alaska

Dear Daily Signal: Thank you for Joseph Backholm’s article on Utah’s Murray School District and the actions of parents to pause the equity committee and book bundle program (“Utah Parents Push Back Against Transgender Agenda—and Win”).

This is the first article I’ve seen that shows the parents in a good light. We are so grateful. We want to get the story out further and are looking for good publicity. Thank you for your honest reporting.—Laurel Fetzer, Utah

I am 63 and can remember having only a few sports offered to me in high school, while the boys had many. I was so glad Title IX offered girls more opportunities to play and grow together.

I think that allowing transgender athletes into girls sports steals away girls’ opportunity to fairly compete against one another.   Self-esteem and scholarships are at stake here; these were the essence and the spirit of the law that we passed in the first place.

I remember the rhetoric about finally “leveling the playing field” by allowing women their own sports. I do not think that a few people in temporary leadership roles should make this decision for my granddaughters.

Dear Daily Signal: I am sorry to say that I didn’t know who actress Gina Carano was until I started watching “The Mandalorian” on Disney+ (“It’s Time to Uncancel Americans”). I was hesitant to watch the show since I’ve not been impressed with the “Star Wars” franchise for some time, the exception being the movie “Rogue One.”

However, I was an instant “Mandalorian” fan and especially grew to love Gina’s character. It was nice to see a strong woman kicking butt and helping to save the day. Plus, of all the female characters, she is the best.

I had read that some fans didn’t appreciate Gina’s political leanings. I never dreamed that Disney would be that stupid to fire her, especially since “Mandalorian” star Pedro Pascal essentially made the same comparison. He has even gone so far as to call Trump supporters Nazis.

And Disney forgave “Guardians of the Galaxy” director-screenwriter James Gunn. Sorry, but joking about pedophilia is never funny nor acceptable.

I have learned that the only way I have to support my beliefs is with my pocketbook. I have canceled Netflix, Pinterest, Facebook, Twitter, and now I have canceled Disney+.

I moved to Utah from South Carolina. I was born in Denver, but liberals have ruined Colorado for me. I can see they are trying to ruin Utah, too.

Many people out here support Gina and loved her character on “The Mandalorian.” I am looking forward to watching her new movie made by Ben Shapiro’s company. She seems like a tough woman; please let her know she is supported by about 75 million folks out here.—Laura Siple, Utah

Dear Daily Signal: I read your article about Justice Clarence Thomas and totally agree with those who protested in his defense (“Smithsonian’s Clarence Thomas Exhibit Guilty of ‘Irresponsible Bias,’ Black Conservatives Say”). I am an 84-year-old white woman who read his memoir “My Grandfather’s Son” years ago.

We lived in Cazenovia, N.Y., where we raised our family through high school years, and were members of a new church plant. I remember vividly being encouraged by our pastor to pray for God to intervene in the ugly Senate proceedings for Clarence Thomas through several prayer meetings and in our own prayer times.

I remember it as an agonizing time as my heart was wrenched for him. We were so thankful when a breakthrough finally came and he was confirmed as a Supreme Court justice.

Since that time I have read various reports and articles highlighting Thomas, saw his wife’s interview about him, and also the latest video testimony of his life. With each one, my respect for him grew.

His sound judgment on the bench or toward life itself seems worth emulating for my generation and for those who follow.  Good humor, kindness, virtue, faith in God and in humanity are what I remember most about Clarence Thomas.

To the curators of the National Museum of African American History and Culture, please correctly reassess and report this man’s life so that future generations will know the truth of his legacy.—Marriet H. Bowser, Brackney, Pa.

I am certain of absolutely one thing with regards to China: Its resolve for global dominance and conquest are horribly and disastrously underestimated.—Todd Hilliard

Kudos to Neil Banerji, author of the well-written piece on Ronald Reagan’s continuing relevance (“Remembering the Gipper: Why the Memory of Ronald Reagan Is Still Relevant to Young People Today”). It’s possibly a timely exhortation in today’s political climate.

The article itself did what the author described Reagan as having achieved—raised optimism.—Steve Wyzga, Gaithersburg, Md.