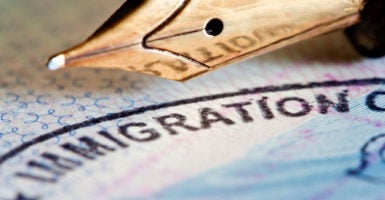 "We have spent over $25,000 in fees to ensure that we comply with the laws of the United States, yet we have no pathway to citizenship," writes Canadian-born immigrants Gary and Shelley Cahill. (Photo: Getty Images)

Editor’s note: This week we feature two letters that really grabbed our attention, from readers with compelling personal perspectives on the U.S. immigration system. Pull up a chair, and remember to write us at letters@dailysignal.com.—Ken McIntyre

Dear Daily Signal: I couldn’t agree more with Genevieve Wood in her recent commentary headlined “4 Keys to the Immigration Reform We Need.” My wife and I are immigrants from Canada under an E-2 investors visa.

We are two legal immigrants who invested our life savings in a small business called Shelley’s Casual Elegance Inc., specializing in ladies’ fashions in South Florida. We left Canada in late 2005 and have expanded and improved the business continuously, spending well in excess of $100,000 of our money and employing over a dozen American citizens in the past 14 years.

We have spent over $25,000 in fees (government and lawyers) to ensure that we comply with the requirements of the laws of the United States, yet in spite of that, we have no “pathway to citizenship.” Our E-2 visa does not give us permanent resident status, but in fact classifies us as resident aliens who are permitted to stay year-round, but leave at least once every two years and return to comply.

We would gladly become citizens if the law permitted it, but instead have to go back to the U.S. consulate in Toronto every five years and beg for another extension to our five-year visa.

We’ve done it a couple of times and as you can understand it is very stressful, knowing that we own a home here in Florida and  for 14 years have been debt-free, supporting ourselves and being a valued asset to our community.

Self-sufficient and married for 38 years, we get upset when people talk about giving amnesty to those who effectively have cut in line in front of law-abiding people like us.

Hopefully, sanity will prevail and someday we’ll get a chance to be loyal citizens of this country. In the meantime, we have to go back to the consulate and hope the State Department staff person is not having a bad day when we appear in front of him or her.—Gary and Shelley Cahill, Naples, Fla.

My grandmother had grown up in a house made of sod, and my grandfather’s only skill was horse trading. My father’s parents couldn’t even afford to buy my father a toy truck that cost only a nickel.

At 9, my father stood in the snow late at night in bare feet. He watched while the only home he’d ever known burned to the ground and left him with nothing but the pajamas he was wearing.

The house my father’s family subsequently rented was so filthy he had to shovel chicken droppings out of it before they could move in. In high school, his parents couldn’t afford a lock for his locker, so he couldn’t play football.

But he believed in the American dream, and that was all he needed to get ahead. When his country called on him to serve in the Marine Corps, he did his duty without complaint. As a navigator, he flew 48 missions in Korea, sometimes with the bottom shot out of the plane.

When he returned to El Toro Marine Base near Irvine, California, he married my mother. He attended UCLA on the GI Bill, not a handout. He earned a master’s degree in engineering and paid high taxes—as high as 50 percent—for most of his life.

He died in 2010 from cancer, hoping his children and grandchildren would live the same American dream. Unfortunately, that dream has been handed to people who have done nothing to deserve it. They are only out for what they can get.

If Americans are left with nothing in the process, so be it. According to the progressives, illegal immigrants are somehow morally superior to the rest of us.

I am a senior citizen with a disability, and no doctor wants to treat me because Medicare pays only half or less than what private insurance companies pay for. If doctors work for a medical group, they are contractually obligated to treat Medicare patients, and so they deliberately inflict pain on me, frighten me, or anger me so I will go away.

About the time he did so, I lost three teeth. An unethical Medi-Cal dentist, I believe, destroyed two of them needing crowns on purpose, so that I would go away. The other tooth was pulled because I didn’t have money for a filling. Medi-Cal no longer covers fillings, only tooth pulling. For that, dentists receive $15 instead of the usual $75.

When I think of the sacrifices my father made so that his children could have a better life, I want to cry.

Those of us with ancestors and relatives who earned the right to be here are living a Third World existence, with the fear that the situation will get only worse as our elected representatives continue to hand our assets over to foreign invaders who erroneously believe it is their right to have them.—Melinda Santa Cruz, Escondido, Calif.

Dear Daily Signal: Why are conservative media outlets dancing around the fact that the so-called Antifa activists are no different than the Nazi Brownshirts and Blackshirts and the KKK?

We have mayors, members of Congress, and the media supporting Antifa’s actions, thuggery, and extreme violence. These black-clad people belong in jail cells, and the people funding their actions should be arrested for aiding and abetting terrorism.

Why hasn’t the Justice Department, FBI, and Homeland Security gone after the bagmen and thugs? The mayor of Portland, Oregon, should be charged with violating the civil rights of those recently assaulted by Antifa thugs.

Notice any common denominators in locations that give these terrorists cover? Is the population of Portland so spineless it supports this kind of terrorism?—Chris Kastner

Dear Daily Signal: Thank you so much for Heritage Foundation President Kay Coles James’ true and beautiful Fourth of July message to us, the commentary headlined “A Nation Worth Lauding.”

It was very difficult to read. Tears kept blurring my vision.

If she ever decides to run for president (of the U.S., that is), she most definitely would have my vote.—J.D.

Dear Daily Signal: I respectfully disagree with Olivia Enos’ commentary, “Trump-Kim Photo Op at the DMZ Fails to Deliver.” As long as Kim Jong Un isn’t shooting ICBMs over South Korea, Japan, and Hawaii, I think that President Trump is making significant progress with the unstable leader of North Korea.

None of us expected Kim to “instantly” shut down his nuke program.  But Trump’s unconventional negotiation process of sanctions plus diplomacy is slowly working. Kim may never shut down his nuclear testing, but as long he’s not launching ICBMs, it’s a victory for Trump.

How do you eat an elephant? One bite at a time.—Allen Muench

Dear Daily Signal: I want to thank your reporter Rachel del Guidice for the article regarding Alveda King and her comments about what Supreme Court Justice Clarence Thomas has been saying recently regarding abortion and eugenics (“MLK’s Niece Applauds Clarence Thomas for Linking Abortion, Eugenics”).

I had forgotten that Planned Parenthood founder Margaret Sanger was a consultant for the Ku Klux Klan. I also did not know that Alveda King is now working for Priests for Life.

Although I am not able to afford a membership in The Heritage Foundation, I am praying for your organization and an end to the culture of death.—Mary Meurer, St. Louis, Mo.

Dear Daily Signal: Thank you for The Daily Signal’s thoughtful, well-written news and commentary. Your articles are where I go for help sorting out the mainstream media and Fox News Channel, as they make their news about the moment, impact, and sensation.

Without your insightful stories, I would be less informed about the goings-on of this world.—Howard Otton

I always thought that the “liberal” party in the USA was called the Democrat Party, composed of Democrats. It rankles when the party is labeled by the media as the Democratic Party.

It seems far less democratic than the Republican Party (composed, of course, of Republicans). The word “democratic” has a specific meaning and connotation that does not belong to the Democrat Party.—Stephen Jessee

I appreciate your news. Thank you for being a good source on illegal immigration. I wondered if you know of some of the diseases that illegal aliens bring in, and are aware of the book “Fraud: How the Left Plans to Steal the Next Election,” by Eric Eggers. We really must stop the hemorrhages.—Alice K.

Please do not post tons of videos.  We don’t need music, pictures, etc., to get our information. At least include a script, so we can get the info and not be held hostage by endless videos.—Carol Stine

I enjoy The Daily Signal and appreciate the title and short blurb from each article included in your Morning Bell email. It would be nice if you also would add the author to each synopsis.—Marie Boyd

Do you think the left-wing corporate presidents (who the stockholders should vote out) and the left-wing media are trying to scare us into a recession in time for the 2020 election?—Robert Albanese

I absolutely love The Daily Signal. There is no other publication like it. I’d feel lost without it!—Loretta Lewis