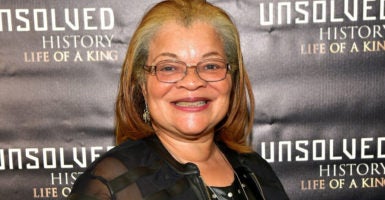 Supreme Court Justice Clarence Thomas is right to call out some abortions as a form of eugenics, a niece of civil rights icon Martin Luther King Jr. told The Daily Signal.

Thomas’ concern, expressed in a Supreme Court opinion Tuesday, is not only relevant but “keeps truth, hope, and justice alive,” Alveda King said the next day in a phone interview.

“It is so important and it’s so true that abortion is eugenics,” King said when asked about Thomas’ opinion. “And Margaret Sanger, the founder of Planned Parenthood, basically said colored people were like weeds and need to be exterminated.”

Thomas made his comments in a concurring opinion as the high court upheld an Indiana law requiring abortion providers to bury or cremate fetal remains, but declined to review another Indiana law banning abortions on the basis of sex, race, or disability.

“Given the potential for abortion to become a tool of eugenic manipulation, the Court will soon need to confront the constitutionality of laws like Indiana’s,” Thomas wrote.

Nevertheless, Thomas wrote that he joined fellow justices in deciding not to hear arguments on the Indiana law banning selective abortions until more lower courts had addressed the issue.

In his opinion, Thomas traced the intertwined history of abortion, eugenics, and Planned Parenthood, which grew into the nation’s largest abortion provider.

King, a former Georgia state legislator, is now director of civil rights for the unborn at the organization Priests for Life.

She told The Daily Signal that “evidence of a eugenics effort” could be seen in Planned Parenthood founder Sanger’s “Birth Control League, her Negro Project, [and] giving free vasectomies and free tubal ligations to colored people, [as] they called us back then.”

Eugenics is a way of controlling reproduction so that only “desired” populations produce offspring, and not “undesired” ones.

“The individualized nature of abortion gives it even more eugenic potential than birth control, which simply reduces the chance of conceiving any child,” the 70-year-old justice wrote, adding that “abortion has proved to be a disturbingly effective tool for implementing the discriminatory preferences that undergird eugenics.”

Sanger reportedly ran in Ku Klux Klan circles and she wrote about meeting with the white supremacy organization in her autobiography.

But King, whose father A.D. King also was a Baptist minister and civil rights leader, said Sanger’s involvement with the Klan and eugenics has fallen under the radar.

“Margaret Sanger herself was a consultant for the Ku Klux Klan [and] we know that part of the agenda of Planned Parenthood has always been—and the abortion lobby—is to minimize and control the African-American population and other minority populations,” King said.

Those who claim to fight for “women’s rights” need to be sure they are not neglecting others’ right to life, she said.

“Passion sometimes can be clouded by emotion, and that way, it’s not always as helpful as it’s desired or intended to be,” King said.

“And so when you are trying to give rights to women, the emotional pull on that forgets the civil rights of the child and the person in the womb, because sometimes emotion can cloud genuine compassion and action.”