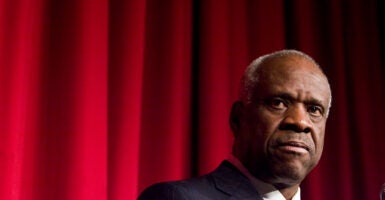 A group of prominent black conservative leaders has written to the National Museum of African American History and Culture calling on it to update its exhibit on Supreme Court Justice Clarence Thomas to more accurately depict his life and legacy. (Photo: James Leynse/Corbis/Getty Images)

A group of black conservative leaders has called on the National Museum of African American History and Culture to update its exhibit on Supreme Court Justice Clarence Thomas to correct what it calls “irresponsible bias” in the display.

“Black history cannot and should not be political,” Rep. Byron Donalds, R-Fla., wrote in a letter last week to the museum originally reported by Fox News.

“The American people deserve an unbiased assessment of the trailblazers in the Black community,” he wrote, “[I]t is time to honor Justice Thomas with this long-overdue documentation of his whole life and history, and not the disingenuous effort displayed today.”

“As a Black man who has a profound respect for the contributions Justice Thomas has propitiated for generations to come, this museum must encapsulate his life as it does for hundreds of other monumental Black figures,” Donalds wrote.

He said the museum does not currently reflect Thomas’ “achievements and life compared to his counterpart, the Honorable Justice Thurgood Marshall.”

When the museum opened it 2016, the only mention of Thomas was in connection with Anita Hill, a former staff member of his who made unproven sexual harassment allegations against him during his 1991 Senate confirmation hearings.

About a year after opening, the museum unveiled a new joint display to highlight the life and work of Thomas and Marshall. Thomas said he was not consulted in the creation of the new exhibit.

The exhibit features a few photos of Thomas, including one of him while he was attending Holy Cross College and another of him on the cover of Jet magazine.

The text below the images of Thomas compares the way in which Marshall’s and Thomas’ opinions of the law were formed:

The University of Maryland Law School would not admit Marshall because he was black. Instead, he attended Howard Law School, and later won a case for another student denied admission to Maryland.

Thomas attended Yale Law School, where he felt that whites resented him and assumed he was admitted because of racial quotas—a slight that shaped his view of affirmative action policies.

For both justices, their experiences with educational institutions informed their perspective on the Court’s role in protecting equal opportunity.

“This museum is a national treasure for our nation’s fabric—this is especially true for me as a Black American and Republican,” Donalds wrote in the letter to the museum. “Black History transcends political correctness and partisanship. Overall, the NMAAHC honors its mission, but it is unfortunate to see pitfalls likely driven by irresponsible bias.”

A museum representative responded to The Daily Signal’s request for comment on the letter by explaining that since its inception, “the museum has sought to document the life, history, and culture of African Americans in this country.”

“While all our exhibitions are based on rigorous research, they are still open to interpretation,” the statement said.

The museum’s statement also addressed the concerns over the way in which Thomas is presented in the exhibit:

As one of only two African American Supreme Court Justices in the history of the United States, Justice Clarence Thomas is featured in the museum along with Thurgood Marshall. As part of the museum’s one-year anniversary in September 2017, the Museum installed a display about the Supreme Court within ‘Defending Freedom, Defining Freedom: The Era of Segregation,’ one of the Museum’s inaugural exhibitions.

Justice Thomas is featured in a case with Justice Thurgood Marshall. We believe the display indeed honors Justice Thomas’ contribution to the legal field and his status as the second African American on the Supreme Court.

“As one of the only two Black men to serve on our nation’s highest and most distinguished court, U.S. Supreme Court Justice Clarence Thomas deserves unbiased recognition from the National Museum of African American History and Culture,” Owens, the Utah Republican lawmaker who co-signed the letter, told Fox News.

Owens—who, like Donalds, is black—also urged the museum to “appropriately honor the continued legacy of Justice Thomas, especially as we celebrate Black History Month and the many trailblazers who faced the odds to secure the dreams of future generations.”