Clarence Thomas Tells His Story in a New Documentary 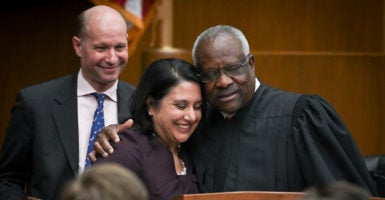 Who is Clarence Thomas?  Every pundit has an opinion, but few actually know him.

Now, we all have an opportunity to hear his story in his own voice. In a remarkable documentary by Michael and Gina Pack, “Created Equal: Clarence Thomas in His Own Words,” the famously silent justice tells his life story.  And not just the small part that everyone has an opinion about, but his whole, and wholly astonishing, story.

As memories of the facts surrounding his contentious confirmation battle—in which Anita Hill accused him of sexual harassment and Thomas vigorously defended himself—have faded with time, public opinion has shifted against Thomas.

At the time of his confirmation, the public was twice as likely to believe Thomas over Hill (55% to 27%), and 58% favored his confirmation.  Today, only 30% of Americans believe that he should have been confirmed, and 38% say he should not have been.

What accounts for these changing opinions? Mostly likely it’s the relentless effort by Thomas’s critics over the last 28 years to tell his story in their own terms.  They lost the battle against his confirmation, but they’ve never stopped fighting the battle over his life story.  Until now, Thomas has largely preferred to stay out of the fight with the exception of publishing his memoir, “My Grandfather’s Son,” in 2007.

Like his memoir, the documentary follows Thomas’s journey from poverty in rural Georgia to the Supreme Court.  Along the way, he lives through segregation, starts upon and then leaves the path to the Catholic priesthood, joins the Black Power movement, goes to Yale Law School, hesitantly joins the Republican Party, and marries the woman he calls “a gift from God.”

Thomas talks about growing up speaking Geechee—a Creole language spoken by the descendants of slaves in Georgia—before Standard English.  He relives his reactions to the assassinations of Martin Luther King Jr. and Robert F. Kennedy, and explains how the prejudice of his fellow seminarians drove him from the church and into radical racial politics.

He describes his slow turn away from those politics and tells how he decided to vote for Ronald Reagan.  And, in a particularly raw moment, he reveals that the racist attacks leveled at him ever since his confirmation continue to create fresh wounds.

Perhaps what makes Thomas’s story most interesting is that it is as much about the people in Thomas’s life as it is about him. He recounts the ways—big and small—that others shaped his life.  From Sister Mary Virgilius, his eighth-grade teacher who wouldn’t let him waste his potential, to John Danforth, who as Missouri‘s attorney general gave Thomas his first job after law school when no one else would (despite his excellent grades).

Hardly a moment goes by in the film when Thomas isn’t speaking about somebody else.

Most often, that person is Thomas’s grandfather who raised him until he later threw Thomas out of his house.  More than anything, the film is the story of how his grandfather shaped him, often against Thomas’s will, into the man he is today. Thomas’s grandfather was hardworking, fiercely independent, and strict.  He lived his life by biblical principles and the sweat of his brow, and he taught Thomas those lessons.

His grandfather’s lessons weave through Thomas’s life as he learns, rebels against, and finally embraces them. Proverbs 22:6 seems to be the unifying theme to his story: “Train up a child in the way he should go, and when he is old he will not depart from it.”

Perhaps, above all else, what makes Thomas’s story so powerful is that it’s relatable.  More than a rags-to-riches story, it’s the story of a person struggling to reconcile his passions with his family values and the world around him.

After all the noise and spin continually whipped up by pundits about Thomas, it’s refreshing to hear the man himself tell his story.  And what a story it is.