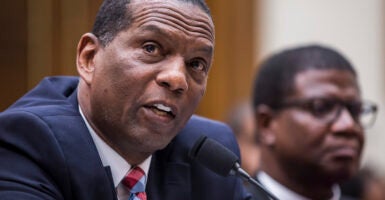 Former NFL star Burgess Owens, seen here testifying before a House subcommittee June 19, 2019, will be on the other side of the microphone when he’s sworn in as a member of Congress on Jan. 3. (Photo: Zach Gibson/Getty Images)

Two newly elected Republican congressmen, both of them black, say they aim to fight socialism and extend the reach of conservatives after they are sworn in on Jan. 3.

“I understand that we’re here together at this particular time in our country’s history for a reason. It is so we can make sure that we, the people, can pull back our country from this evil, dark abyss of socialism,” Rep.-elect Burgess Owens, R-Utah, a former pro football star, said Tuesday at The Heritage Foundation’s annual President’s Club meeting.

The President’s Club meeting, held online because of the coronavirus pandemic, featured scholars and experts from The Heritage Foundation as well as leaders in the conservative movement, including Sens. Mike Lee, R-Utah, and Marsha Blackburn, R-Tenn., and Rep. Jim Banks, R-Ind., the newly elected chairman of the House’s Republican Study Committee.

Owens said that conservatives are talking about socialism more than ever and must continue to educate the public on its evils.

But now we’re waking up, that we understand what’s going on. And now we understood what a great president President [Donald] Trump was for us and, hopefully, could still be. We don’t know. We need to fight for it.

We cannot go back to sleep again and let the left continue to do what they do so well … with lies to undermine our system and divide us. We just cannot let that continue to happen.

Donalds, 42, whose 19th Congressional District incorporates Cape Coral, Fort Myers, Naples, and Marco Island, previously served in the Florida House of Representatives. He said a main goal of his will be to reach out and grow the conservative base.

“Running for Congress was just as much …  about budget reform and paying down our debt, and health care reform and entitlement reform,” he said.

Donalds said conservatives need to go where they ordinarily aren’t found to get their message out to those who need to hear it.