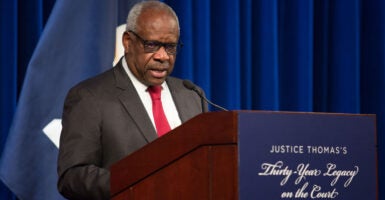 Justice Clarence Thomas has distinguished himself as a rigorous jurist on the Supreme Court. He is also distinguished as a long-serving member—with 30 years on the bench, he is the 16th longest-serving justice of the 115 men and women who have served on the court. Should he continue to serve through May 20, 2028, he will become the longest-serving justice in history, surpassing Justice William O. Douglas.

Describing, let alone evaluating, a 30-year judicial record is challenging on its own, but Thomas’ record of judicial service is continuing. A few aspects of his Supreme Court tenure stand out.

Thomas wrote a concurring opinion in Gamble v. United States in which he described the “modest” judicial task this way: “We interpret and apply written law to the facts of particular cases.” Sounds simple enough. Since America’s Founders designed our system of government, however, the tough issue has been how judges should perform this modest task.

Thomas has always been clear about the right answer. When Thomas’ confirmation hearing before the Senate Judiciary Committee opened on Sept. 10, 1991, Sen. Orrin Hatch, R-Utah, said, “I am confident that Judge Thomas will interpret the law according to its original meaning, rather than substitute his own policy preferences for the law.”

Those are, in fact, the two basic interpretive choices: figuring out what the law’s author meant by what the author wrote, or imposing a meaning upon the law of the judge’s choosing. Thomas embraces the former, and rejects the latter.

Many reporters or commentators in 1991 portrayed this as if it were little more than a personality quirk, describing Thomas as “marching to a different drummer” or an “enigmatic nominee.” Thomas had always resisted being pigeon-holed by labels, either personally or professionally, his judicial philosophy is deeply rooted in the principles of America’s founding.

For example, a March 2008 profile in The Wall Street Journal, titled “Mr. Constitution,” quoted him this way: “I don’t put myself in a category. Maybe I am labeled as an originalist or something, but … I don’t feel I have any particular right to put my gloss on your constitution. My job is simply to interpret it.”

Thomas brings this understanding of the judicial job description to each case. He is not satisfied with the court reaching the right result, but insists on reaching that result in the right way. In 1988, years before becoming a judge, Thomas even dared question how the Supreme Court reached its result (with which Thomas agreed) in Brown v. Board of Education.

That opinion was, he wrote, a “missed opportunity” because it was based more on sociological or psychological evidence about the effects of segregation than on the constitutional principle of equality.

This is one of many ways in which Thomas shows he is more about substance than form. Supreme Court observers, for example, have noted that Thomas asks few questions during oral arguments. National Public Radio, for example, made it a banner headline in February 2016: “Clarence Thomas Asks 1st Question From Supreme Court Bench in 10 Years.”

The 30 minutes that each side can interact with the justices, however, is the tiniest fraction of the Supreme Court’s work on a particular case. Thomas has said that he’d rather listen to the lawyers than to himself or his fellow justices.

But when it comes to the court’s most important work on a case, the written opinion explaining its decision, Thomas works harder than anyone.

According to data compiled by SCOTUSblog.com, for example, Thomas has written the most total opinions (majority, concurring, and dissenting) in eight of the last 10 terms, more than 700 total opinions since he joined the Supreme Court.

The Harvard Law Review also compiles and publishes statistics from each Supreme Court term, including the total number of pages for each justice’s opinion. Thomas ranked first, second, or third in a majority of terms for which data were available.

In oral arguments, justices’ questions may (or may not) reflect their actual thoughts or even be related at all to the case at hand. A justice’s written opinion, however, whether for himself alone or for a unanimous court, is the real deal.

Unlike most new justices, Thomas wrote a lone dissent in a case argued less than three weeks after he took office. In Dawson v. Delaware, the Supreme Court voted 8-1 that a convicted murderer’s membership in the Aryan Brotherhood was an irrelevant factor that should not have been considered in deciding whether to impose the death penalty. Thomas disagreed, arguing that “[j]urors do not leave their knowledge of the world behind when they enter a courtroom and they do not need to have the obvious spelled out in painstaking detail.”

Like Dawson v. Delaware, Chief Justice William Rehnquist wrote the opinion in Missouri v. Jenkins, ending nearly two decades of judicial control over nearly every aspect of education in the Kansas City school district in the name of racial integration. This time, Thomas wrote a lone concurrence that opened with these words: “It never ceases to amaze me that the courts are so willing to assume that anything that is predominantly black must be inferior … It should by now be clear that the existence of one race schools is not by itself an indication that the State is practicing segregation.”

Both Dawson v. Delaware and Missouri v. Jenkins are examples of Thomas bringing his own perspective, background, and life experience to bear, but with one crucial caveat: He does this in a way that informs or supplements, rather than controls or drives, his judging.

For him, the judicial task does not change that his job is to interpret the Constitution or statutes (discern what the author meant by what the author wrote) and apply them impartially to the facts of each case. But as he wrote about jurors in Dawson v. Delaware, judges do not leave their knowledge of the world behind when they enter a courtroom. The key is for judges to remember the difference between their knowledge of the world and the law.

Others have noted this important distinction. Judge Robert Smith, who served on New York state’s highest court for a decade, published an essay titled “Why I Admire Justice Thomas” in 2009. He came to this conclusion the old-fashioned way, by reading Thomas’ opinions. He quoted President Barack Obama’s remarks when nominating Justice Sonia Sotomayor that a Supreme Court justice should understand that “justice isn’t about some abstract legal theory or footnote in a case book” but “also about how our laws affect the daily realities of people’s lives.”

That understanding, however, “does not mean making the more sympathetic party win in each case or using the law to advance a liberal or conservative political agenda. It means understanding the deep and long-range implications of a legal rule which will affect future cases that the rule’s author will never see. It is here where Justice Thomas excels.”

Before joining the Supreme Court, Thomas served for 19 months on the U.S. Court of Appeals for the D.C. Circuit. Shortly after joining that court, he and I talked about how he viewed his judicial role as different from his previous position as head of an executive branch agency. Every day when I put on that robe, Thomas said, “I have to remind myself that I am only a judge.”

It’s easy to find others eager to say this to a judge, but it is much more profound for a judge to say this to himself. This is why Justice Clarence Thomas will continue to have such a profound impact on our nation and our liberty.