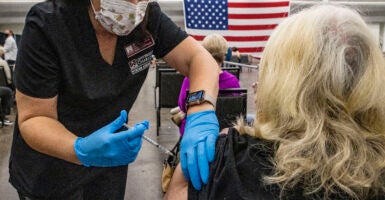 North Dakota and New Mexico have outperformed most other states in getting needles into arms, using about 96% of their allotments of COVID-19 vaccines for residents, The Daily Signal has learned.

At the other extreme, Tennessee, the District of Columbia, and Alabama each is at or below 70% use of the vaccine doses received.

Using data as of March 1 from the Centers for Disease Control and Prevention, The Heritage Foundation compiled a ranking and an overview. The aim: to show how consistent the states and the nation’s capital have been in staying above or below the national median in administering two currently available COVID-19 vaccines.

>>> See How Your State Compares Nationally in Giving COVID-19 Vaccines

A state’s ranking doesn’t tell the whole story of how effectively it has administered vaccine doses.

For example, Texas consistently had remained above the national median in giving shots during the pandemic. But the Lone Star State, which just announced it is “reopening,” had a significant dropoff after being hit by a severe ice storm.

Another state that is reopening, Mississippi, has stayed below the national median in administering shots. Mississippi administered 73.2% of its 869,955 doses.

Texas was well ahead of the national median for states out of the gate starting the week of Jan. 10. It remained there until the week of Feb. 14, when Texans weathered a paralyzing ice storm and transportation issues.

Mississippi, on the other hand, remained at a steady pace relative to the national median, staying below it for January and February.

Because rankings change at least nominally on a daily basis, following the trends through January and February can be more informative, said Ed Haislmaier, a senior research fellow in health policy at The Heritage Foundation who participated in the analysis.

“States that took a logistical approach as opposed to a regulatory approach seem to be doing better,” Haislmaier told The Daily Signal. “It’s not entirely a red state-blue state issue. The size of the state is not really a determinant.”

The retail pharmacy program is an administration partnership with 21 chain pharmacies and a network of independent pharmacies to cover about 40,000 locations across the United States.

“Now that we’re at the stage where the president just announced we’ll have enough vaccines to vaccinate all of the American people by the end of May, we will eventually reach a point where we will have more vaccines than people who want vaccines,” Psaki said.

President Joe Biden has said he expects to have enough vaccines for the adult U.S. population by the end of May.

At this rate, Haislmaier told The Daily Signal, that goal might be overly optimistic.

“May is optimistic to get the supply out,” he said. “It is realistic to have enough supply by June or July to vaccinate 300 million people, which is the adult population.”

According to the Heritage analysis, states at the bottom and administering less than 78% of doses are, in descending order: Delaware, New York, Maryland, Arkansas, Mississippi, Texas, Pennsylvania, Georgia, Kansas, Tennessee, and Alabama, plus the District of Columbia.

Missouri, which has used 81.1% of the 1.6 million doses it received, is the median for all states and the District.

A median is a number that represents the midpoint separating the upper half in a list from the lower half.

New Mexico’s numbers have run far above the median for states. The state used 96.3% of its 738,705 does. A key part of this success is a first-in-the-nation vaccine registration system, said Matt Bieber, a spokesman for the New Mexico Department of Health.

“The system allows users to enter their age, employment information, and health conditions, and then places them in the appropriate vaccine distribution phase,” Bieber told The Daily Signal. “It also enables providers to enroll and create vaccination schedules. [The Department of Health] can then match users with providers who have vaccine in their area and send appointment notifications. So far, nearly 700,000 New Mexicans have enrolled.”

West Virginia has run well above the median for states, and consistently has been among top states in rate of vaccine administration, said Allison Adler, a spokeswoman for the West Virginia Department of Health and Human Services. The state has used 88.2% of its 605,255 doses.

“The state’s driving principles for COVID-19 vaccinations are to build community immunity in West Virginia by protecting our most vulnerable, reducing deaths, reducing hospitalizations, and maintaining access to critical services such as acute care,” Adler told The Daily Signal in an email, adding:

Initially, West Virginia modified its plan from those used in other states because about 54% of the state’s pharmacies are not chain affiliated. West Virginia worked with the State Pharmacy Board and the West Virginia Health Care Association to modify its approach to focus on vaccinating long-term care staff and residents. Recently, West Virginia opted into the federal pharmacy program, where we are partnering with Walgreens.

Three companies developed vaccines under the Trump administration’s Operation Warp Speed, a wartime-style initiative to develop, produce, and distribute a COVID-19 vaccine or vaccines as quickly and as safely possible.

Arizona, now running above the median for states, has four mass-vaccination sites set up in sports stadiums. Three are in Phoenix and one in Tucson, and they have administered about 1.2 million doses, said C.J. Karamargin, spokesman for Arizona Gov. Doug Ducey, a Republican. The state used 86.1% of its 2.1 million doses.

“Gov. Ducey places a high priority on getting the vaccines in the arms of Arizonans,” Karamargin told The Daily Signal, adding:

Gov. Ducey views this as a friendly competition among states on one level, but the governor also sees this as our way out of this pandemic. The governor has called the vaccine a modern medical miracle. … He recognizes this is a race against the clock and a race to be done with this pandemic.

Of the largest states, Florida, ranking 32 in Heritage’s assessment, has used 80% of the 6.3 million doses it received from the federal government.

Through January and February, California consistently had been  below the median compared to other states, but recently caught up. Texas was well above the median until Feb. 14.

New York started on a par with the median but fell behind beginning Feb. 21. Florida was mostly at or slightly above the median, according to Heritage’s analysis.

“Florida and New York consistently perform on average with other states in giving [vaccine] shots,” Heritage’s Haislmaier said. “California has always been below the median.”

“Texas, until recently with the bad weather, was consistently above the median,” he said. “Those are the largest states, and there is not a clear pattern.”