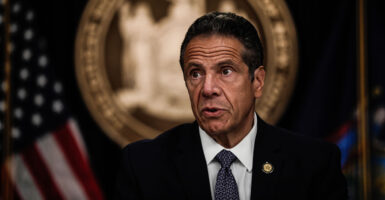 On March 25, New York Gov. Andrew Cuomo made one of deadliest mistakes of the coronavirus crisis, signing an executive order forcing nursing homes in his state to accept patients who tested positive for the coronavirus. Around 4,800 New Yorkers died from COVID-19 in those nursing homes from March to May—approximately 25% of all fatalities in the state.

As The New York Times noted in May, New York City seeded the wave of outbreaks across the nation. Some of the carnage was likely unavoidable, but we can attribute the high number of nursing home deaths, at the very least, to Cuomo’s ineptitude.

Yet, even as his state was failing to meet its most serious challenge since 9/11–it wasn’t until May 6 that cleaners began disinfecting the subway system, for example—Cuomo was busy taking softball questions on national cable news from his obsequious brother, Chris. On “The Tonight Show,” Jimmy Fallon marveled at how “smart” and “honest” Cuomo was as the two discussed the governor’s global popularity and “Cuomosexual fans.”

For those who tell you the media don’t matter, Cuomo now has among the highest approval ratings of any governor in the nation, almost all of whom have governed far more capably.

Will Florida Gov. Ron DeSantis be heralded as a great governor should his state end up with a fraction of the deaths New York experienced? Unlikely.

If all of that wasn’t bad enough, after more than 32,000 deaths, Cuomo and his fans are now celebrating a victory over the coronavirus.

Within the poster’s pyramid of mythical accomplishments, there is a quote from A. J. Parkinson—an imaginary philosopher invented by Cuomo’s father, Mario. It says, “Tell the People the Truth and They Will Do the Right Thing,” which is highly misleading since the bottom of the pyramid isn’t built upon the bodies of 30,000 dead.

Nevertheless, there was Andy Slavitt, the perpetually mistaken Obama-era bureaucrat who is constantly being trotted out by cable news as an expert on the coronavirus, there was no other place that beat the disease like New York.

Others claimed that New York’s victory could be seen in its lack of deaths this week. This is tantamount to declaring New York victorious over Islamic terrorism on 9/12 because no one died in the city that day. To paraphrase Pyrrhus, another such victory over COVID and we are undone.

While some states struggle more than others, and the coronavirus is still spreading, only one state demonstrably failed to accomplish its most basic mission. You will remember the importance of “flattening the curve” to ensure that we didn’t overwhelm hospitals with new cases. (The fantastical notion that we could escape without widespread infections was not yet normalized.)

We don’t know what the future holds, and, obviously, there are likely to be spikes as we move forward with reopening. But there is no measurement at our disposal and no level of gaslighting that will change the fact that Cuomo-led New York was an utter failure.