With Cuomo Under Scrutiny, New York Switched to Undercounting Deaths in Nursing Homes 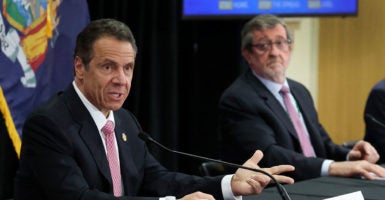 Democratic New York Gov. Andrew Cuomo was asked on April 20 what the state policy was for readmitting nursing home patients who tested positive for COVID-19. “That’s a good question, I don’t know,” the governor says. Pictured: Cuomo speaks while President and CEO of Northwell Health Michael Dowling looks on during a coronavirus briefing at Northwell Feinstein Institutes for Medical Research on May 6 in Manhasset, New York. (Photo: Al Bello/Getty Images)

The New York State Department of Health’s quiet switch to a reporting method that undercounts deaths of nursing home and other long-term care facility residents followed the administration facing criticism over skyrocketing deaths in such facilities.

New York knowingly omitted an unknown number of coronavirus deaths in recent reports regarding residents of nursing home and adult care facilities as a result of a quiet rule change, the agency acknowledged to The Daily Caller News Foundation.

The state changed the rules for counting nursing home deaths between April 28 and May 3, after several days of scrutiny of a Health Department order requiring nursing homes and other long-term care facilities to admit or re-admit positive coronavirus patients.

Democratic New York Gov. Andrew Cuomo was asked on April 20 what the state policy was for readmitting nursing home patients who tested positive for COVID-19.

On April 21, the day after Cuomo admitted on live television that he didn’t know what his own policy was, New York Post columnist Michael Goodwin excoriated the governor’s handling of the nursing home issue.

Goodwin wrote that “it was well known that the elderly were easy targets for the coronavirus before New York adopted its Health Department directive on March 25 requiring nursing homes to accept those with the disease.”

The next day, April 22, two state lawmakers, a Republican and a Democrat, demanded Cuomo nix the requirement that nursing homes accept positive coronavirus patients. That order, which Cuomo waited roughly six weeks to reverse, has been blamed for the decimation of nursing homes across New York.

“We know that coronavirus spreads like wildfire among the most vulnerable and it is nonsensical to import cases of COVID to a place where community spread could lead to grave consequences for residents,” Republican state Sen. Joseph A. Griffo said at the time. He begged Cuomo to “put an end to this dangerous and potentially deadly practice.”

“Governor Cuomo must act immediately to put an end to this,” she said.

On April 23, Cuomo was asked about the policy and insisted that care facilities “don’t have a right to object” to the requirement that they receive positive coronavirus patients. “That is the rule and that is the regulation and they have to comply with that,” he said.

That same day, unnamed administrators in New York nursing homes told the Post that body bags were sent to them along with the nursing home patients they were forced to accept.

On April 28, the Post’s editorial board slammed Cuomo for refusing “to face facts” on the “horrors” taking place at nursing homes across the state. The governor was “refusing to admit his team has made a mistake in forcing nursing homes to take in patients infected with the deadly coronavirus,” the op-ed charged.

Before Cuomo reversed the much-maligned order on May 11, his administration began knowingly undercounting the nursing home death toll as a result of a quiet rule change.

Until at least April 28, the Health Department was disclosing coronavirus deaths of all nursing home and adult care facility residents, regardless of whether the patient died at their long-term care facility or at a hospital. By May 3, the department had made a subtle change to its disclosures, according to web archives.

The agency now only discloses coronavirus deaths of long-term care patients who died while physically present at their facility.

Put differently: A nursing home resident, who becomes sick at their nursing home and then dies an hour after arriving at a hospital isn’t counted in New York’s tally of nursing home deaths. The end result is a sharp reduction in the official number of deaths at many such facilities.

New York is the only state with a major outbreak in nursing homes to report those fatalities that way.

The state Health Department did not return a request for comment for this story.

Andrew Kerr contributed to this report.