What Data Shows About Impact of COVID-19 Vaccines So Far 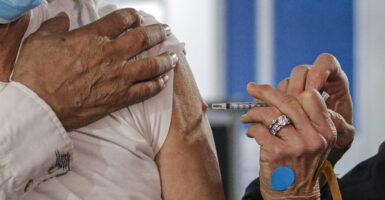 Are the COVID-19 vaccines effective? The early evidence is very encouraging. After the vaccine distributions began in December, we have seen a marked and sustained decline in hospitalizations in America for most of January.

COVID-19 testing rates have been fluctuating for the past several months, probably due to the holiday season and inclement weather, so hospitalizations are currently a better gauge of the pandemic situation in America.

On Jan. 6, America hit a record high, with 132,474 current hospitalizations, according to the COVID Tracking Project. Since then, we have seen three straight weeks of decreasing hospitalizations. That portends real progress against the COVID-19 pandemic.

There are several possible explanations for this downturn in hospitalizations, all of them likely contributing to it.

First, the holiday travel season is over, so the increased socialization of the holidays can no longer contribute to COVID-19 cases. It should be noted, however, that the current spike in cases began in late September, well before the holidays.

Second, all spikes eventually come to end, even if the pandemic has not ended. This phenomenon occurred after the initial spike in the spring of 2020. That tapered off until summer, which saw a spike that peaked in July but tapered off until September.

The spike that occurred in the fall, which appears to be tapering off now, has been the longest and most severe one. And it is only natural that it should begin to decline at some point.

Or third: The vaccines have begun to have a real effect on the course of the pandemic.

Both of these vaccines require two doses several weeks apart for the full effect: three weeks for the Pfizer vaccine and four weeks for the Moderna one. The Pfizer vaccine had a demonstrated 95% efficacy one week after the second dose, and the Moderna vaccine had a similarly high efficacy, 94.5% two weeks after its second dose, against COVID-19 illness of any severity.

Both vaccines demonstrated 100% efficacy against severe COVID-19. That is, in both trials, zero persons who received the vaccine developed severe disease and needed hospitalization.

Thus, given that the Pfizer vaccine was authorized on Dec. 12, with injections beginning on Dec. 13, the first Pfizer vaccine recipients would have benefited from its 95% efficacy by Jan. 10.

By similar considerations, the first Moderna vaccine recipients would have started benefiting from its 94.5% efficacy by Jan. 30.

As the percent efficacy is an illustration of the degree of protection from the reaction of the body’s immune system, all vaccine recipients would have incrementally increasing immunity from the virus within days of their first injections.

As a case in point, the Pfizer data showed that one week after the first dose, the vaccine demonstrated approximately 50% efficacy in preventing COVID-19. Thus, the Pfizer vaccine would have begun having a protective effect during Christmas week.

In other words, it is very likely that the sharp and sustained drop-off in hospitalizations at this time is due in large part to protection conferred by the authorized vaccines.

It is also significant that every state vaccination priority plan has placed health care workers, the elderly, and nursing home residents at the top. The elderly, especially those residing in nursing homes, have been particularly vulnerable to infection, severe disease, and death.

Therefore, vaccinating them first will protect the most vulnerable and preserve the most life.

In addition to hospitalizations, death rates have appeared to plateau as well, although these rates fluctuate in large part due to inconsistent reporting. Deaths should be expected to decline because mortality is generally driven by the complications of severe COVID-19 manifestation.

If hospitalizations, cases, and deaths continue to decline, it will likely be the vaccines’ effect. The vaccines have long been anticipated to break definitively the grip of COVID-19 on society.

Whether this is truly the end of COVID-19 remains to be seen, but the vaccines are out, the timing makes sense, and all the evidence points to the success of America’s race to the vaccine.