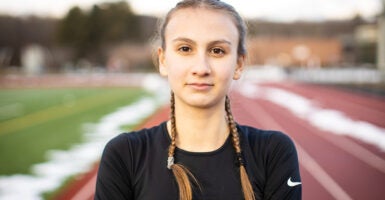 “No girl should have to settle into her starting blocks, knowing that no matter how hard you work, you don’t have a fair shot at victory,” track athlete Chelsea Mitchell says after a court hearing. (Photo: Alliance Defending Freedom)

The future of women’s sports is on trial in Connecticut.

“No girl should have to settle into her starting blocks, knowing that no matter how hard you work, you don’t have a fair shot at victory,” track athlete Chelsea Mitchell said. “That’s the situation I faced over and over again throughout my high school career.”

Mitchell spoke at a press conference Friday after a court hearing to determine whether biological males who “identify” as females should be allowed to compete in women’s sports in Connecticut.

Mitchell is one of four female athletes represented by the Christian legal organization Alliance Defending Freedom in the U.S. District Court for Connecticut.

Alliance Defending Freedom filed the case, Soule v. Connecticut Association of Schools, in early 2020 after asking the U.S. Department of Education to investigate the policy of Connecticut school districts and the Connecticut Interscholastic Athletic Conference allowing biological males to compete against women.

Friday’s hearing began with arguments from those representing the cause of transgender females, and focused on the meaning of Title IX in federal law. Title IX protects individuals from discrimination on the basis of sex within education programs, including school sports.

The argument that allowing transgender girls to compete on female sports teams will squeeze women out of their own sports is “a very aggressive prediction of what might happen in the future, but has no actual basis in fact,” Block said.

“There is room enough on the podium for everyone,” he said, adding that accommodating biological females “does not require schools to shove aside girls who are transgender and deny them of participation opportunities.”

Roger Brooks, a lawyer with Alliance Defending Freedom, was quick to counter.

Brooks said that Terry Miller, a biological male who competed against Mitchell in 2018 and took the girls state championship in the 100-meter dash, had pushed Mitchell “off the top-three victory podium.”

“No, there is not room for everyone on the victory podium,” Brooks said.

Over the course of two and a half years of athletics seasons, biological males in Connecticut have “taken 15 state championships … in girls track events, set a number of state records … and have taken more than 85 opportunities for girls to participate in advanced competitions, … state and regional championships,” he said.

In addition to Mitchell, Alliance Defending Freedom represents female athletes Selina Soule, Alanna Smith, and Ashley Nicoletti. All have lost medals and opportunities to compete in advanced events due to the policy implemented in 2013 by the Connecticut Interscholastic Athletic Conference, which allows transgender females to compete in women’s sports.

“Throughout my four years of high school, I was forced to compete against biological males,” Soule said during the press conference after the hearing.

Girls across Connecticut, and New England, all knew the outcome of our races long before the start, and it was extremely demoralizing.

We have missed out on medals and on opportunities to advance. But when we have asked questions, we have been told we’re allowed to compete, but we don’t have the right to win.

We work incredibly hard to shave fractions of a second off of our time to win, not to place third and beyond.

After months of waiting for action from the adults who were supposed to protect us and our pursuits, we had no choice but to file a lawsuit challenging this policy.

The aim of the lawsuit is to ensure that the protections Title IX offers girls and women are being upheld, and to determine whether the Connecticut Interscholastic Athletic Conference policy violates the federal civil rights law.

Much of the case rides upon the court’s definition of sex, Brooks said during the hearing.

“If sex, in the Title IX athletic regulations, must now be construed as a matter of law to mean gender identity rather than biological sex … then this court should dismiss this case,” Brooks said.

He added that if the court concludes that the law “now prohibits us from distinguishing between biological females on the one hand and biological males with a transgender female identity on the other, then there is nothing left to talk about if we are not permitted to make that distinction.”

But if the term “sex” within Title IX indeed means biological sex, then it cannot also mean or include gender identity, Brooks said.

District Court Judge Robert Chatigny, a 1994 appointee of President Bill Clinton, presided over the hearing. Chatigny said he would announce his decision in two to three weeks.