Biden’s Executive Order on Gender Discrimination Has Muddied Waters on Title IX. Challenges Could Clear That Up. 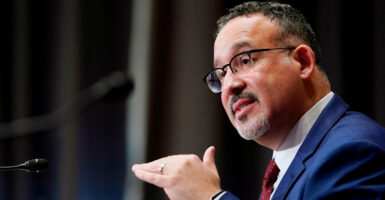 A month ago on Jan. 20, a newly minted President Joe Biden—who had remarked on Twitter during his presidential campaign, “Let’s be clear: Transgender equality is the civil rights issue of our time”—issued a lightning-fast executive order on the subject.

Biden’s “Executive Order on Preventing and Combating Discrimination on the Basis of Gender Identity or Sexual Orientation” directs the head of each federal agency to:

Section 1 of that order references Bostock v. Clayton County, the landmark 2020 decision in which the Supreme Court held that Title VII’s prohibition of sex discrimination in the employment context also covers discrimination on the basis of gender identity and sexual orientation.

But the order goes further, stating that “Under Bostock’s reasoning, laws that prohibit sex discrimination—including Title IX of the Education Amendments of 1972 … prohibit discrimination on the basis of gender identity or sexual orientation.”

Title IX, as written, prohibits discrimination “on the basis of sex” in “any education program or activity receiving federal financial assistance.”

Setting aside the blistering speed and volume of the nascent administration’s executive orders, and despite Biden’s previous statements that overuse of executive orders was the purview of dictators, the executive order on gender identity and sexual orientation is itself problematic for many reasons.

Chief among them is its reliance on an expansive interpretation of Bostock that simply doesn’t pass muster when applied to Title IX. If anything, the White House order has significantly muddied the waters on the ongoing battle over the viability of women’s athletics, locker rooms, bathrooms, and other sex-segregated educational spaces.

But the Department of Education’s engagement in the rule-making process on Title IX would clear them up.

As criticisms mounted over Biden’s aggressive fiat, USA Today’s “Fact Check” said that criticisms of the order lacked context, but it was nonetheless forced to admit that the executive order called for a “broader application of last year’s Supreme Court Bostock v. Clayton County ruling.”

And while not expressly tying an education institution’s federal funding to the participation of biologically male athletes who “identify” as women on female sports teams, the order fails to consider that recipients of federal education funding must certify their compliance with the nondiscrimination laws enforced by the Department of Education.

Biden’s pick for secretary of education, Miguel Cardona, has already proclaimed his intentions to follow the order by doing away with sex-based distinctions in sports.

Further complicating matters is the not insignificant fact that Justice Neil Gorsuch, in writing for the 6-3 majority in Bostock, went to great lengths to specifically avoid addressing Title IX and any related hypotheticals that might arise.

He made clear that the court’s opinion was limited to the question of Title VII and employment discrimination alone, explicitly stating: “Under Title VII, too, we do not purport to address bathrooms, locker rooms, or anything else of the kind.”

While Gorsuch rather cavalierly dismissed the far-ranging implication of the Bostock decision, thereby inviting future litigation on the issue, it remains the case that the court had the opportunity to swing for the fences on sex discrimination as “gender identity” discrimination in other federal laws—but demurred.

In a timely effort to bypass an anticipated flurry of individual complaints, protracted investigations, and associated litigation on the issue of Title IX, the feminist Women’s Liberation Front issued a petition for rule-making to the Department of Education on Feb. 8, in accordance with the Office of General Counsel’s procedures for requesting such rule-making and guidance.

Such rule-making would force the Department of Education to correct the administration’s overly broad executive order, one that’s poised to sweep Title IX into a burgeoning body of bad law on gender identity without the benefit of judicial consideration.

The Women’s Liberation Front’s rule-making petition requests that the department issue and amend Title IX regulations in order to comply with the executive order, while preserving the “legal permissibility of factually, objectively identifying people as males (boys and men) or females (girls and women) and … contin[ue] to distinguish between individuals on the basis of sex when such distinctions are important for ensuring equal opportunities for women and girls to flourish in education programs and activities.”

What the “cancel culture” faction seems to have forgotten is that biological sex is still the foundation for anti-discrimination law.

Quite simply, biological sex was not only the starting point for the majority’s analysis in Bostock, it was the linchpin of the Supreme Court’s entire decision. (“[T]he ordinary public meaning of the term ‘sex’ in Title VII means biological distinctions between male and female.”)

The court’s inquiry centered on whether “but for” the petitioner’s biological sex, the outcome would have been same. (“If an employer would not have discharged an employee, but for that individual’s [biological] sex, [Title VII’s] causation standard is met, and liability may attach.”)

Biological sex is also essential to the accurate interpretation and application of Title IX in American education, as the statute and its implementing regulations are written in such a way as to recognize sex as a binary choice—male and female (“for members of each sex”)—and go on to specify examples of sex-segregated activities, including athletics, intimate facilities, father-daughter and mother-son dances, and others.

Either these activities and facilities can be separated by biological sex, or they must be sex-neutral and open to anyone for any reason.

Doing that, of course, would vitiate 50 years of progress women have made toward sex parity in education.

Biden has made clear that he welcomes this cultural moment on the expansion of “gender identity” protections. He announced, for example, that he would appoint Rachel Levine, a transgender woman (biological man), to the post of assistant secretary for health and human services before he had even taken the oath of office.

But his reactionary response vis-a-vis the executive order on gender identity and sexual orientation has left girls and women in American schools abandoned in favor of platitudes on “respect” and “dignity.”

What about those principles when girls are forced to share bathrooms with biological boys, or a young woman loses her track championship to someone with a biological advantage she will never possess?

It will now be necessary to perform the long, difficult analysis required by the president’s attempted unilateral modification of long-standing federal law and to engage in a public comment period in order to clean up the mess the administration has made. Even then, the outcome of this process is far from clear.

Codifying “sex,” by recognizing it as the biological and binary separation between males and females, would provide much-needed clarity for the females of today and their daughters of tomorrow.

Failing to do so may well destroy the hard-won protections of Title IX that girls and young women have enjoyed for almost 50 years.

If the president wants to show the women of this country that he truly values them, if protecting women is, as some have written, “part of his brand,” then he ought to direct his Department of Education to specify, once and for all, that Title IX means exactly what it says.