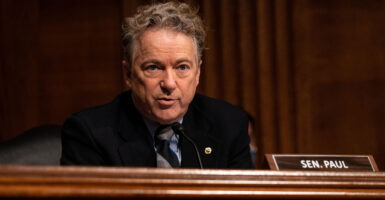 At a Senate committee hearing Wednesday, Sen. Rand Paul, R-Ky., had a sharp exchange with President Joe Biden's nominee to be secretary of education over allowing biological males "identifying" as female to compete in girls sports. (Photo: Anna Moneymaker/Getty Images)

President Joe Biden’s pick for Education Department secretary said Wednesday that schools have a responsibility to let biological males participate in girls sports if they identify as transgender.

“If confirmed, it’s my responsibility and privilege to make sure that we are following the civil rights of all students, and that includes activities that they may engage in in high school or in athletics,” Cardona said.

“I think that it is critically important that education systems and educators respect the rights of all students, including students who are transgender, and that they are afforded the opportunities that every other student has to participate in extracurricular activities,” he said.

Paul asked Cardona whether it bothered him that “girls are being pushed out” of their own sports, telling Cardona that allowing biological males in girls sports would “completely destroy girls athletics.”

“I recognize and appreciate the concerns and frustrations that are expressed,” Cardona said, adding that he has had conversations with families who felt similarly to Paul.

“I understand this is a challenge, and I look forward to working with you and others,” he added, as Paul interrupted him to ask: “Do you think it’s fair to have boys running in the girls track meet?”

“I think it’s the legal responsibility of schools to provide opportunities for students to participate in activities, and this includes students who are transgender,” he said.

Biden signed an executive order in January that sets the stage for rolling out transgender protections—a move that critics protested through the hashtag “Biden erased women.”

“Children should be able to learn without worrying about whether they will be denied access to the restroom, the locker room, or school sports,” Biden’s executive order said, calling for “all persons” to receive equal treatment under the law, no matter their gender identity or sexual orientation.

“President Biden’s executive order has directed federal agencies to eviscerate legal protection for women and roll back nearly 50 years of gains for women,” Alliance Defending Freedom legal counsel Christiana Holcomb told The Daily Caller News Foundation in January. “We’re going to have to wait and see how each agency either revokes current protection for women based on their sex or issues new policy guidance that allows biological males to, for example, compete in women’s sports.

“We’re going to see impact in the sports context, but far beyond that as well,” she added. “Especially in health care and women’s shelters, and restrooms and locker rooms. In fact, the executive order itself specifically called out school restrooms, locker rooms, and sports competitions. So we know that these things are coming. It’s a really scary prospect for the future of women’s sport.”