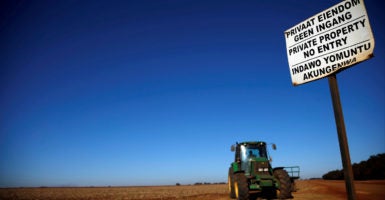 A "no entry" sign is seen at an entrance of a farm outside Witbank, Mpumalanga province, South Africa, July 13, 2018. (Photo: Siphiwe Sibeko/Reuters/Newscom)

When a recent report on the uncompensated seizure and redistribution of farmland held by white farmers in South Africa drew the concern of President Donald Trump, his South African counterpart told him to “stay out of our issues.”

Subsequent reports have raised questions about how extensive the land expropriations are and the level of violence associated with the seizures.

The African National Congress is the longtime ruling party in South Africa, and it is currently headed by that country’s president, Cyril Ramaphosa. Ramaphosa drew U.S. media scrutiny after Tucker Carlson, on his Fox News Channel show, reported Aug. 22 that Ramaphosa had begun “seizing land from his own citizens without compensation because they are the wrong skin color.”

Carlson condemned the land seizure as “racist” because the South African government is largely black and the farmers in question are white, and he urged the U.S. State Department to condemn the move as well.

After Carlson’s program aired the segment, Trump tweeted his reaction and asked Secretary of State Mike Pompeo to “look into the matter.”

In a subsequent speech, Ramaphosa responded to Trump’s tweets by saying, “Stay out of our issues, and we will not get involved in your issues in America.”

I have asked Secretary of State @SecPompeo to closely study the South Africa land and farm seizures and expropriations and the large scale killing of farmers. “South African Government is now seizing land from white farmers.” @TuckerCarlson @FoxNews

Trump’s tweet generated a lot of attention and discussion about what’s really going on in South Africa.

The African National Congress has proposed expropriation of farmland without compensation, but no such changes have been made yet to the South African Constitution.

Uncompensated expropriation means the government could force farmers to give up some or all of their land without any payment in return.

The Daily Signal spoke with a white South African farmer regarding the current political climate in his country, as it relates to the safety of white farmers and their land.

For his safety, the pseudonym Paul Engle will be used in lieu of his real name.

Engle owns and operates a 50-acre macadamia nut farm in the northeastern part of South Africa. He grew up in South Africa and has been operating the farm for more than five years.

“The history of the situation is that, obviously, white farmers were privileged during apartheid,” he said, referring to South Africa’s system of apartheid, the racist segregation of blacks and whites under white-minority rule. “They were given farms or access to farms.”

South Africa’s apartheid ended in 1994, and the country has been governed by the black majority since then.

The South African publication Farmer’s Weekly reported that in 1994, there were 120,000 commercial farms in operation. Today, that number has shrunk to 35,000.

Engle said nearly 100,000 farmers have moved off the land, some because of concerns about crime, while others simply retired and their sons have chosen not to work the land. “They don’t want the struggles. They don’t want the hassle,” he explained.

He said that many of those vacated farms have been sold, largely to those who were pushed off the land during apartheid. But the reclaimed land is not being farmed, and it’s no longer producing commercial crops.

This loss of productivity is an increasing concern among South Africans, in terms of the overall economic stability of the nation.

“So, the breadbasket just keeps shrinking, which means that the very people who want the land are the ones who are going to suffer, because as food supplies decrease, the prices increase, which means more food must be imported,” Engle explained, adding:

I think where the situation is at the moment is, white farmers—and unfortunately, those are the guys that know how to farm—they have the resources, the know-how, the technology, after having been there for generations.

That sector of our economy is dwindling. And then of course more pressure is coming on now, as the government is talking about expropriation without compensation. So it is a very delicate, vulnerable part of the fabric of South Africa.

Joshua Meservey, a senior policy analyst on Africa and the Middle East at The Heritage Foundation, says it’s unlikely that the government would seize land from all white farmers. It’s more probable that land would only be taken from some farms or portions of farms, he said.

Engle said that at the beginning of the year, Ramaphosa asked for a report to be compiled that would essentially give voice to all South Africans on the topic of land expropriation.

“All across the nation they had meetings speaking to communities, businesses, agricultural sectors, all aspects of society,” he said. “Then that was going to be written up in a report to go back to the government to say, ‘This is what the nation is saying [about expropriation].’”

The report was due to be completed by the end of August, but it has yet to be released. Earlier this month, however, Ramaphosa said the African National Congress would not wait for the report, but would go ahead with the expropriations process.

South African news outlet News24 reported on Aug. 1 that Ramaphosa said “the ANC would propose an amendment to the Constitution to Parliament, outlining conditions for expropriation of land without compensation.”

Engle explained that this statement was made by Ramaphosa, not as the president of South Africa, but as the leader of the African National Congress. “He is making it as a political statement, rather than as a decision of government,” he said.

He said that in the northeastern province of Limpopo, a government minister has already started the process to take away two commercial farms and that the secretary of the African National Congress has declared white farmers can only own 12,000 hectares—about 25,000 acres—and they must hand over the rest of their land to the state.

Ramaphosa now appears to be backtracking somewhat on some of his more radical statements, according to Engle. The South African leader said, “We are not going to steal and grab land,” News24 reported Aug. 3.

Engle told The Daily Signal that the rhetoric and actions of the country’s political leaders have been inconsistent on the issue.

This has been “causing a lot of unrest in the country,” Engle says. “It’s not as if Ramaphosa is driving the ship and there is one voice. There are multiple voices.”

Engle described the political motivation for the land expropriation. The “ANC has become unpopular because they have not managed the country well. It appears that Ramaphosa was pushed down the road of land expropriation without compensation by the EFF [Economic Freedom Fighters, the extremist party led by Julius Malema].”

He said the African National Congress has been the ruling party for more than 20 years, but during that time the nation has seen an increase in crime and a radical decline in the quality of health care and education.

The people of South Africa have begun to lose faith in the African National Congress. The land-grab rhetoric is an attempt to win back lost popularity, he said.

“They are talking about change in education, land, and health so they can gain favor. It is very political. They are motivated by politics, by wanting to stay in power,” Engle said. “I do not see a pure heart of, ‘Let’s help the nation. Let’s help the poor. Let’s help our people.’ It is all politics.”

The Heritage Foundation’s 2017 Index of Economic Freedom states that “South Africa’s economic growth has decelerated because of declining global competitiveness, growing political instability, and weakened rule of law that in 2017 caused the country’s investment-grade credit rating to be downgraded to junk status, denting investor confidence.”

Heritage’s Meservey added: “One of the problems with the expropriation-without-compensation proposal is that it presupposes the deeply corrupt South African government—which has already made a hash of previous land-reform efforts—could manage this new process competently and justly. That’s a dubious proposal.”

“We have to be giving back, but it cannot be at the expense of the economy, and it cannot be done illegally … . I think there is a realization that [expropriation] needs to be done, because it will lead to the peace of the country,” he said. “And there are a lot of poor people. They need a piece of their own land that they can farm and raise some chickens on, particularly around the cities.”

When asked about safety concerns, Engle shrugged. “Yeah, I mean, where we are is very safe … but there is always that sense of, it could happen, it could happen at any time.”

“But there is no escalation of crime against white farmers. It is not any more than it has been since 1994. The crime on the farms, the murders and so forth, is not necessarily political. It is just that farmers are a soft target,” he explained.

“Often, it is the workers that are disgruntled because they have not gotten what they want, or maybe the farmer has been harsh on them. Maybe he has been racist towards them. It’s kind of payback; so, that does happen.”

Crime and corruption are not unknown in South Africa’s history, but the political climate is quite distinct now. “It feels like South Africa is spinning out of control,” Engle said.

He expressed uncertainty as to where his county is headed. There’s a genuine concern that South Africa will go down the same road as neighboring Zimbabwe, falling into political corruption and economic ruin.

Robert Mugabe, the longtime former president of Zimbabwe, also engaged in land expropriation without compensation. Once white farmers in the former Rhodesia began losing their land—and sometimes even their lives—the Zimbabwean economy collapsed.

Engle said it remains to be seen what will happen in South Africa, but added he is praying for a miracle because “it will take a miracle to turn it around.”