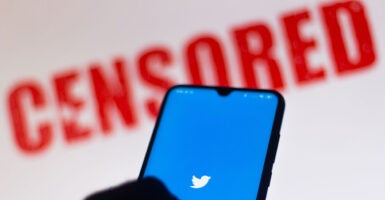 The Daily Signal contacted Twitter regarding Speech First's suspension. A Twitter spokesperson offered this vague explanation: “We permanently suspended the account referenced under our platform manipulation and spam policy and as part of a larger investigation.” (Photo Illustration: Rafael Henrique/SOPA Images/ LightRocket/Getty Images)

The Twitter account for a national free speech organization has been suspended for allegedly violating Twitter’s rules, but the group’s president says she has no idea why the account would be suspended.

“I looked at all the tweets that I had approved for the couple of days before, and nothing is like doxxing anybody,” Nicole Neily, Speech First’s president, told The Daily Signal in an interview Tuesday. Doxxing is the publishing of private or identifying information about an individual on the internet, usually with malicious intent.

The national organization, which works to promote free speech on campuses, in the media, and in the courts, had its Twitter account suspended on Feb. 8.

“I’ve read the terms of service and why you might be suspended, and literally nothing lines up,” Neily said.

“It was like we were sharing news articles, nothing controversial, not like, you know, ‘flat-earthing’ or ‘COVID-denying’ or any of that stuff. So … it’s like it’s a total mystery today.”

On Jan. 8, Twitter permanently suspended the account of former President Donald Trump. Other conservatives’ accounts on Twitter have since been suspended, among them the account of Project Veritas, a conservative-leaning undercover reporting organization. It was suspended on Thursday for “repeated violations of Twitter’s private-information policy,” a Twitter spokesperson said, according to Politico.

The Twitter account for the Job Creators Network, a nonpartisan organization that supports small businesses, business leaders, and entrepreneurs, was suspended for what Twitter called “violating rules against platform manipulation and spam,” WCIV-TV Channel 4, the ABC affiliate in Charleston, South Carolina, reported.

Lora Ries, director of the Center for Technology Policy at The Heritage Foundation’s Davis Institute for National Security and Foreign Policy, told The Daily Signal in an email that Speech First deserves an explanation.

Twitter’s actions indicate otherwise. What possible reason would Twitter have for suspending the account of Speech First, an organization to promote free speech on campuses?

Twitter is not following its own process. The company owes Speech First an explanation and an appeal. This suspension and lack of promised process by Twitter compounds the belief held by many that the company is censoring conservative speech.

The Daily Signal contacted Twitter and, according to a spokesperson for the platform, Twitter said it “permanently suspended the account referenced under our platform manipulation and spam policy and as part of a larger investigation.”

Twitter cited the platform manipulation and spam policy, referencing the section that says users can’t take part in “coordinated activity that attempts to artificially influence conversations through the use of multiple accounts, fake accounts, automation and/or scripting … .”

Neily said the experience has illustrated for her the power that the tech titans have.

“What’s kind of sad and frustrates me is, we really haven’t weighed into the whole debate over big tech censorship of conservative organizations,” she said, adding:

I do believe that they are … private platforms. They’re allowed to set the rules of engagement. Like if I were to have a dinner party, and somebody wants to come over and start screaming at my guests, like, I’m [within] my rights to tell them. But the fact that they’re not living up to their purported terms of the deal, I think, is frustrating.