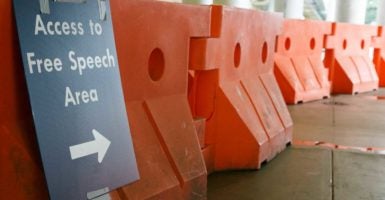 FIRE, an organization dedicated to protecting the constitutional rights of college students, has helped file the first lawsuit as part of a new campaign to end “free speech zones” on college campuses. (Photo: John Rudoff/Polaris/Newscom)

An organization dedicated to protecting the constitutional rights of college students has helped file the first lawsuit as part of a new campaign to end “free speech zones” on college campuses.

The Foundation for Individual Rights in Education, or FIRE, helped Los Angeles Pierce College student Kevin Shaw file a lawsuit after he was told he could hand out U.S. Constitutions only in a tiny sector of campus. FIRE calculated the size of the free speech zone at Pierce College to be equivalent to an iPhone on a tennis court.

Last November, Shaw tried to pass out Spanish-language versions of the Constitution in an attempt to recruit new members for Young Americans for Liberty, a right-leaning student organization. As he was doing so, an administrator told him he could not hand out literature outside of the campus free speech zone—and that if he wanted to do it there, he would have to fill out a permit. He was also told he would be kicked off campus if he did not comply.

“When I attempted to hand out copies of the Constitution that day, my only intention was to get students thinking about our founding principles and to inspire discussion of liberty and free speech,” Shaw said in a statement released by FIRE. “I had no idea I would be called upon to defend those very ideals against Pierce’s unconstitutional campus policies. This fight is about a student’s right to engage in free thinking and debate while attending college in America.”

Pierce College is one of nine schools in the Los Angeles Community College District, with a network of about 150,000 students. It is the largest community college district in the country. The district has a policy requiring the president of each college to designate a free speech zone on campus.

Opponents of free speech zones consider the whole idea to be upside-down, an implication that free speech cannot be practiced anywhere else on campus.

In a statement to the Los Angeles Daily News, the LACCD defended its policy and commitment to the First Amendment.

“The Los Angeles Community College District firmly stands behind every student’s right to free expression,” said district consultant Yusef Robb. “We have no further comment on the lawsuit at this time.”

Shaw’s lawsuit is the first in FIRE’s Million Voices Campaign, which “aims to free 1 million student voices by striking down unconstitutional speech codes nationwide,” according to the organization’s director of litigation, Marieke Tuthill Beck-Coon.

The campaign is part of the organization’s Stand Up For Speech Litigation Project, which launched in 2014. FIRE’s legal network says the project has won nine victories that resulted in policy changes affecting more than 600,000 students, as well as winning damages and attorney’s fees of more than $400,000.