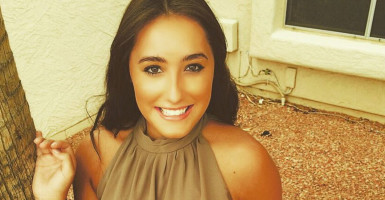 A student at an Arizona community college is challenging her school’s so-called “speech zone,” arguing the policy “severely limited” her right to free speech and due process.

Brittany Mirelez, a freshman at Paradise Valley Community College in Maricopa County, Ariz., was kicked out of the designated speech zone in October for failing to obtain permission to use the space.

Mirelez had set up a table to converse with students about a group she is trying to start called the Young Americans for Liberty. The group, which has branches nationwide, advocates for limited government and liberty-minded candidates.

Originally, Mirelez said a Student Life official granted her permission, but shortly after setting up her table, a different official told her she had to leave because she didn’t get approval to use the space 48 hours in advance.

“It was just rude and uncalled for,” Mirelez, 18, told The Daily Signal. “I didn’t really understand the big deal, so we had a little argument for 10 minutes. Then I finally was like, ‘I’ll go inside even though I don’t see the difference between being inside versus outside.’”

After being told that she violated campus policy, Mirelez packed up her belongings and left the area.

But two months later, The Daily Signal has exclusively learned that Mirelez filed a federal lawsuit in the U.S. District Court of Arizona against Dr. Paul Dale, president of Paradise Valley Community College, along with two other campus officials.

In the lawsuit, Mirelez alleges “the fear of arrest or punishment severely limited [her] constitutionally-protected expression on campus.”

“This is unnecessary and unconstitutional,” Mirelez said, arguing her free speech shouldn’t be confined to a particular space on campus.

In the lawsuit, her attorney argued that because Paradise Valley Community College receives public funds, “the First Amendment rights of free speech and press extend to campuses of state colleges.”

Mirelez is not seeking specific monetary damages, but she is asking the school and its officials to cover her legal fees and more importantly, to change its campus “speech zone” policy.

The Daily Signal obtained a copy of the school’s current policy, which states that students are entitled to “speak in public and to demonstrate in a lawful manner” Monday through Friday between the hours of 9 a.m. and 4 p.m. That speech is limited to one particular outside walkway. According to court documents, the speech zone “comprises less than 0.26 percent of the entire Paradise Valley Community College campus.”

“Colleges are supposed to be a place where ideas are freely shared, not gagged or suppressed,” Tyson Langhofer, an attorney with Alliance Defending Freedom, which is representing Mirelez in her lawsuit, told The Daily Signal. “College really works against its own purpose when it places restrictive speech rules above freedoms that the First Amendment guarantees to students and all other citizens.”

Free speech zones are a contested policy among college campuses, and often find themselves subject to lawsuits.

This is not the first lawsuit that members of Young Americans for Liberty have brought forth against speech codes. In March, three students from Dixie State University filed a similar lawsuit, alleging the university refused to approve promotional flyers about Presidents George W. Bush and Barack Obama, and Cuban revolutionary Che Guevara. According to the Foundation for Individual Rights in Education, those flyers “disparage[d] and “mock[ed]” those individuals.

On Sept. 17, Dixie State settled with the students, agreeing to revise the campus speech policies and pay $50,000 in damages and attorney’s fees.

Mirelez said she is “hopeful” to reach a similar outcome. And for the most part, the political science major said she has the support of her teachers and fellow students.

“I think a lot of people would approve of getting the [speech zone] taken away,” she said. “A lot of students have told me it’s weird that they only see us in one spot, that they would like to see us around campus more.”

“You don’t wake up and say I kind of want to sue my school to get rid of something,” Mirelez added. “But it’s gotta happen.”