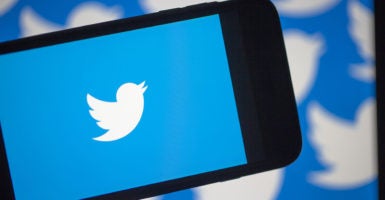 It's a mistake for any platform to drop its neutral stance and take on fact-checking duties, a task that's going to be impossible to accomplish. Pictured: Twitter application's logo is seen on a screen of a mobile phone in Ankara, Turkey, on Nov. 30, 2019. (Photo: Aytac Unal/Anadolu Agency/Getty Images)

No American, not even the president, has an inherent right to a social media account. Tech companies are free to ban any user they see fit.

They’re free to fact-check anyone they want, to create a framework of acceptable speech, and to enforce their policies either consistently or capriciously. They’re free to accuse Donald Trump—and only Trump, if they see fit—of being a liar. They’re free to do all of these things.

Even if they shouldn’t.

Yesterday, after years of pressure from media and Democrats, Twitter labeled two of Trump’s tweets—in which he had claimed that the use of mail-in ballots for large numbers of people would be “substantially fraudulent” and result in a “rigged election”—as “potentially misleading.”

It’s a mistake for any platform to drop its neutral stance and take on fact-checking duties, a task that’s going to be impossible to accomplish either objectively or effectively. It’s going to corrode trust in the brand, but it won’t change a single mind.

Once Twitter begins tagging some tweets and not others with “what you need to know,” it will be staking out partisan positions. The Trump tweets that precipitated its first fact check are a good example of this.

It would have been far more reasonable for the social media giant to label Trump’s ugly and slanderous tweets about Joe Scarborough as misleading. Instead, Twitter decided to inaugurate its policy by alleging that Trump had dishonestly claimed that mail-in ballots would lead to “a Rigged Election.”

Even if this contention were entirely baseless, it would be as untrue as saying Russia rigged the election—a claim that politicians such as Adam Schiff and Nancy Pelosi, along with most major media outlets, have been making for years.

But while the president’s rhetoric about voting is debatable, it is also well within the normal parameters of contemporary political discourse.

It’s not exactly “unsubstantiated” to assert that more mail-in ballots “would lead to voter fraud,” as Twitter holds. There are dozens of instances of potential voter fraud investigated every year. The Heritage Foundation has cataloged 1,285 prosecuted cases.

Which is to say that contending that “voter fraud” is a problem is no more misleading than contending tax cuts will hurt the poor or that repealing net neutrality rules will destroy the internet.

In practice, “voter fraud” is no more a conspiracy theory than is “voter suppression.” Both happen on occasion, yet there is no evidence that either has toppled the outcome of any modern election.

In another tweet, Trump claimed that everyone in California will be mailed a ballot. This is factually untrue. But so is the pinned tweet of former Vice President Joe Biden: “I can’t believe I have to say this, but please don’t drink bleach.”

The president never instructed anyone to drink bleach, yet Biden repeats this incessantly, along with numerous other misleading statements about his record and GOP policies.

Which brings us to the problem: Who will Twitter designate as its judge? Its fact-checking page redirects users to debunkings by CNN, The Washington Post, Vox, HuffPost, and other outlets that often deceive their audiences with far more sophistication than the president. These outlets like to appeal to the authority of experts, but not experts whose conclusions contradict their own.

There is a reason we debate issues rather than appoint “truth magistrates” to hand down verdicts: For the most part, politics is a dispute not over facts but values.

As is often the case, Trump immediately ceded the high ground by threatening to “strongly regulate” or shut down social media platforms. Such threats are nothing new for this president, who has often menaced media with regulations and legal action, although one cannot help but notice a paradox.

Trump never follows through on his destructive threats to inhibit speech but does follow through on his promise to cram the courts full of judges who have deference for the First Amendment, while those who talk in the loftiest terms about the press tend to pressure tech companies to constrain interactions, to ban accounts, and to “fact check” their partisan foes.

The distress over social media is predicated on the idea that average Americans are too dim to grapple with the messiness of unfettered speech. Many leftists—those who wanted to institute Fairness Doctrines or overturn Citizens United—admit this openly when they suggest that unregulated speech is corroding “democracy.”

Trump is the first president to take advantage of direct, instantaneous access to millions of Americans. Whether this is helpful to his cause is debatable. Certainly, we are blessed that the president’s policies and rhetoric are often disconnected. Whatever the case, though, we have an entire industry that stands ready to challenge the veracity of his statements.

We don’t need Twitter to join in the fact-checking game. Silicon Valley doesn’t have the resources, knowledge, or people to do it correctly.