Christmastime Is Not the Time to Hold Tariff-Cutting Program Hostage 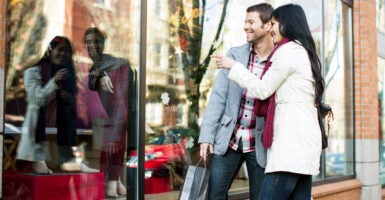 The Generalized System of Preferences is set to expire at the end of the month.This program eliminates tariffs on thousands of products, which saves Americans from having to pay higher prices. (Photo: Jordan Siemens/Getty Images)

After a year that was tough on businesses and consumers alike, the Christmas season could give a much-needed boost to the economy—as well as the morale of people across the country. But if a federal program that cuts tariffs is allowed to expire—thanks to political game-playing by liberals in the Senate—then the resulting spike in consumer prices will be sure to dampen holiday cheer.

The Generalized System of Preferences program, which eliminates tariffs on thousands of products from around the world, is set to expire on Dec. 31. The program saves American businesses and families roughly $1 billion in import taxes—also known as tariffs—on products originating in the developing world.

More affordable imports allow American businesses to produce their products at more competitive prices, allowing them to grow their businesses and create jobs right here in the U.S.

Democrat senators reportedly have a slew of demands that they want in exchange for the renewal of the Generalized System of Preferences program. Senate Finance Committee Chairman Chuck Grassley, R-Iowa, finds the demands “not very appropriate,” because they could jeopardize the chances of an extension.

A lapse in the program would spell higher prices for American consumers and businesses. A three-year lapse in the program that ran from 2013 to 2016 cost Americans $1.3 billion. It caused long-term damage to businesses, including worker layoffs, hiring freezes, wage and benefit cuts, and capital investment delays.

A recent Heritage Foundation report summarized the situation as follows:

The program is currently set to expire on Dec. 31, 2020. Congress should renew the Generalized System of Preferences without delay and commit to the program for at least an additional 10 years.

Those in the Senate who are playing politics with the Generalized System of Preferences program should focus on how to ensure America’s economic rebound, and not put the livelihoods of Americans on the chopping block right at Christmastime.