Steel Tariffs Mean No Party for This Maker of Beer Kegs 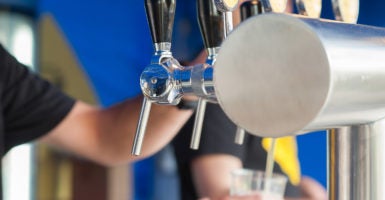 American Keg, which makes beer kegs, has had to lay off 30 percent of its employees following imposition of steel tariffs. (Photo: Ingram Publishing/ Newscom)

Pennsylvania-based American Keg, the only U.S. company that makes beer kegs, has been sobered by the results of President Donald Trump’s recent tariffs on imported steel.

CEO Paul Czachor, who came to Washington earlier this year to seek tariffs on Chinese keg makers, says on his company website that the steel on which his company depends—and part of the current tariff war with China—has risen so much in cost that American Keg has had to lay off 30 percent of its employees.

Does this eye-for-an-eye philosophy on tariffs work?

Not to Brian Luzzi, American Keg’s sales and marketing director, who had to deliver the news about the layoffs.

“I hired every single one of our employees and I had to lay off about a third of them off,” Luzzi said on CNBC. “One day you’re giving somebody a chance at employment, and the next day you’re telling them they don’t have a job anymore. It is personal.”

American Keg’s commitment to use all-American steel, and thus live up to its name, has hurt the company because tariffs now in effect have caused domestic steel prices to rise exactly as government planned.

But earlier this year, when Czachor requested protectionary tariffs of 76 percent on his company’s Chinese-based competitors, he blamed the 25 percent tariff on imported steel, as well as Chinese dumping practices, for his company’s hard times.

Czachor even went so far as to say that such a tariff “would have a neglectable [impact] to no impact on consumers.”

He was not the only CEO to request this protection from Chinese competition, and some, like him, were among the last companies of their kind remaining in the United States.

Ultimately, whether companies survive should depend on whether they can meet customer demand at competitive prices.

When academics declare “we need to level the playing field,” we need to ask what they are talking about. Businesses do not compete on a “level playing field”—the fields always have advantages and disadvantages particular to each.

A business owner has to figure out how to thrive in a unique situation, not on a “level playing field.” That’s what drives innovation.

Protectionism, on the other hand, sets a precedent that a business can use the force of government to make itself more competitive, rather than rely on good business practices. American free enterprise can and should rely on the marketplace to determine winners and losers, not the heavy hands of government bureaucrats.