3 Reasons Trump Should Pull the Plug on Solar Tariffs 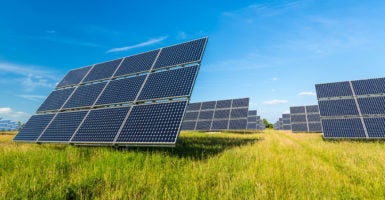 An expansive trade case has simmered on the back burner since April 2017 and is now finally on its way to President Donald Trump’s desk for a decision by Jan. 26.

The case involves two failing manufacturing companies—Suniva and SolarWorld—which have petitioned the government for globally applicable tariffs on inexpensive imports of solar cells and panels.

That petition has run the gauntlet of comments, hearings, and analysis from the U.S. International Trade Commission.

Since then, organizations across the political spectrum, including the Solar Energy Industries Association, have made the case for why the requested tariffs would be harmful for the solar industry writ large.

Here are a few reasons why rejecting the request for sweeping tariffs would be consistent with Trump’s campaign trail ideals and policy vision for energy dominance.

As a candidate in 2016, Trump said, “We will get the bureaucracy out of the way of innovation, so we can pursue all forms of energy. This includes renewable energies and the technologies of the future.”

There is almost no better way to fossilize an industry than by guaranteeing prices and knocking out the competitors of a select few companies. The only innovation that this spurs is creative ways to lobby the government for new ways to interfere in energy markets.

>>> These 2 Foreign Companies Want Protection From the US Government. They Don’t Deserve It.

Such intervention would also punish competitive American solar companies in order to keep two failing ones afloat. Refusing new tariffs on solar imports allows the best parts of the solar industry to rise to the top.

“We cannot have obstruction,” the president said in June 2017. “We have to get out and do our job better and faster than anybody in the world … . The Trump administration is committed to energy policies that lower costs for hardworking Americans and maximize the use of American resources.”

Trump should protect competition, not specific competitors. The solar industry in America can provide customers the best, most affordable service to Americans when it is able to access components from the most competitive companies around the globe.

The proposed tariffs block this access. In essence, they are a massive regulatory subsidy for Suniva and SolarWorld—at the expense of the rest of the solar industry.

Rather than let the market reward successful companies and technologies, tilting the playing field only breeds competition for more government intervention.

>>> The Absurdity of Propping Up 2 Favored Solar Companies

Suniva and SolarWorld’s petition is only the most expansive in a string of petitions for tariffs, which were granted in 2012 and 2015. It should also come as no surprise that the solar industry, which is opposing Suniva and SolarWorld, has requested subsidies to help the industry cut its losses if these new tariffs are imposed.

The president said last June: “We’re here today to usher in a new American energy policy—one that unlocks million and millions of jobs and trillions of dollars in wealth. But this full potential can only be realized when government promotes energy development … .”

Suniva and SolarWorld argue that global tariffs are essential to their survival and will create thousands of jobs. Using the force of government to eliminate a company’s competitors will almost certainly preserve those company jobs.

But Trump needs to take a wider view of solar energy jobs. George Hershman, president of Swinerton Renewable Energy, a utility and commercial solar company, noted in a December press conference that in addition to the people he employs directly, Swinerton “purchased over $88 million in steel racking.”

“One of our largest suppliers is Steel of West Virginia, located in Huntington, West Virginia, as well as Panelclaw, located in North Andover, Massachusetts. We spent $71 million on electrical equipment, like transformers made by Virginia Transformer of Roanoke, Virginia, and Construction Innovations in Sacramento, California.”

There will be negative implications for the rest of the industry and the indirect jobs it creates if the administration bends over backward to shore up two failing companies. The federal government shouldn’t be the arbiter of whose job is more valuable.

Trump should decline to do what far too many congressmen of both parties are eager to do—namely, use the power of government to manipulate energy markets in favor of their preferred energy technologies or against the ones that don’t fit their political narratives.

Trump has spoken unapologetically about unleashing the competitiveness of the entire energy sector. The best way to get there is to remove barriers, rather than create them.

Rejecting this latest petition for more solar tariffs is a solid step in that direction.