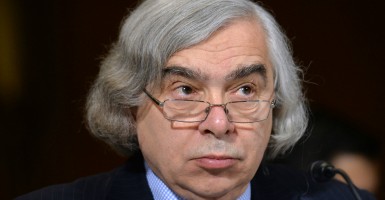 During the Department of Energy budget hearing Thursday, House Appropriations Chairman Hal Rogers, R-Ky., had a few choice words for Energy Secretary Ernest Moniz, saying that the Energy Department had not invested enough in carbon capture and sequestration technology (which has been plagued with politics, cost over-runs, time delays and scalability).

“What I consistently see … is a budget request with an astronomical increase for renewable energy research and inadequate investments in the fossil energy program,” Rogers stated. “This tells me the administration’s goal is not really an all-of-the-above portfolio with clean coal; it’s to take coal totally out of the equation.”

Moniz responded by detailing the “comparable budgets” of hundreds of millions of dollars each that the Department of Energy proposes to spend on energy efficiency, renewables, “sustainable” transportation and conventional energy like nuclear and fossil fuels. This sort of bartering and haggling of tax dollars for Rogers’ coal interests and Moniz’s renewable energy agenda is exactly what the new Congress should be avoiding.

What’s going on here? Republicans won majorities in the new Congress by convincing voters that they were different than Democrats and the Obama administration.

Americans have become increasingly frustrated with a federal government that is too keen to hand out favors to politically preferred energy technologies and fuels.

The Obama administration’s 2009 economic “stimulus” bill diverted billions of dollars to politically preferred energy technologies like solar power and electric cars, with story after story trickling out about abuse of funds and taxpayer liability. Energy spending increased nine-fold with the stimulus bill and from 2002 to 2012, federal spending on energy exploded by almost 2,400 percent.

But as Rogers aptly demonstrated yesterday, and too many congressmen before him, politicians in both parties are keen to divert taxpayer dollars to their own pet energy projects or grab some sort of advantage from the federal government.

While politicians and individual companies might benefit from this way of governing in some sort of near-sighted and short term way, at the bottom of the pile are American taxpayers, constituents and customers. This “favoritism for some” energy policy:

Good energy policy — one that increases energy production, creates jobs and grows the economy — would  have no special favors or treatment for individual energy sources or technologies, would set the boundaries for fair competition, and would leave more decisions in the hands of Americans and fewer in the hands of Washington politicians and bureaucrats.