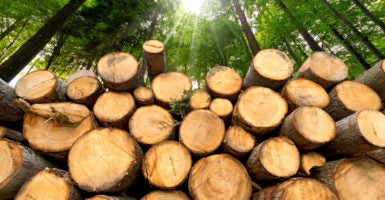 The average price for a new house has increased $1,360 since President Donald Trump's tariff plan was announced in December. (Photo: Catalby/Getty Images)

The import of softwood lumber from Canada, such as pine, spruce, and fir, into the United States is an issue of contention dating back to the 1980s.

Recently, the United States imposed steep tariffs, or taxes on imports, on Canadian softwood lumber imported into the U.S. The ongoing dispute between the two countries is providing additional stress to already-tense NAFTA negotiations, and is hurting American homebuyers.

Prior to the December decision to impose the tariffs, anticipation of the ruling had already had an impact on the U.S. housing market—the largest consumer of Canadian softwood lumber. Since the plan was announced, the average cost of building a home in the United States has increased by an estimated 7 percent, with the actual price per house rising by $1,360.

Tariffs on Canadian softwood lumber thus reach deep into new homebuyers’ pockets, causing them to settle for smaller homes, or ones with fewer amenities. Some families opt to buy older homes, rather than new homes, hurting home construction jobs. Others drop out of the market altogether.

Because of the huge demand for lumber to feed the U.S. housing market, it is mutually beneficial for both countries to reach a permanent agreement on U.S. softwood lumber imports from Canada that allows trade to flow unimpeded across the U.S.-Canadian border.

Only time will tell if policymakers allow for such a welcome turn of events to occur.