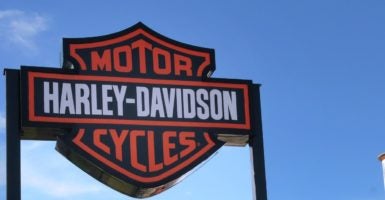 When tariffs are imposed, companies affected, like Harley-Davidson, need to balance these extra costs to stay in business. (Photo: Paul Hennessy/Polaris /Newscom)

Corianna Baier is a member of the Young Leaders Program at The Heritage Foundation.

Harley-Davidson’s motto is “All for freedom. Freedom for all.” Today, however, the freedom to trade in America is deteriorating—and because of that, the iconic motorcycle manufacturer will be moving some of its production overseas.

The United States imposed tariffs of 25 percent on steel and 10 percent on aluminum in March. On June 1, America’s closest trading partners, including the European Union, became subject to the tariffs after President Donald Trump ended their exemption.

Now, the EU is retaliating by imposing tariffs on imports from the U.S., and Harley-Davidson is one of the unfortunate victims. Tariffs on its products are increasing from 6 percent to 31 percent. Harley-Davidson expects that this will increase the cost of a motorcycle exported from the U.S. to the EU by more than $2,000, resulting in annual additional costs of $90 million to $100 million.

When tariffs are imposed, companies affected, like Harley-Davidson, need to balance these extra costs to stay in business. The options are painful, but could include laying off workers, increasing prices, or delaying expansions.

In the case of Harley-Davidson, the company filed with the Securities and Exchange Commission to announce its plan to “shift production of motorcycles for EU destinations from the U.S. to its international facilities to avoid the tariff burden.”

In response to Harley-Davidson’s announcement, House Speaker Paul Ryan said, “This is further proof of the harm from unilateral tariffs. The best way to help American workers, consumers, and manufacturers is to open new markets for them, not to raise barriers to our own market.”

Unfortunately, Harley-Davidson will not be the only company in America forced to make this tough choice.

While some companies may not decide to shift production overseas, the other options they have to deal with—laying off workers, increasing prices, or delaying expansions—are all bad for American workers and families. The end result of increased tariffs will be a combination of qualified workers not getting hired, other workers losing their jobs, and families paying higher prices.

Trump should eliminate the steel and aluminum tariffs before they hurt even more American businesses, workers, and families.